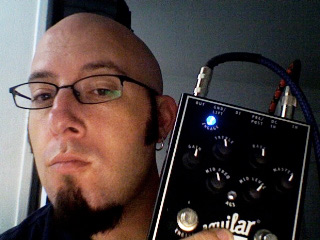 Fiuczynski was recently awarded a 2011 Guggenheim Fellowship to develop his Planet MicroJam concept, a new musical language combining microtones, jazz harmonies, and new beats. “It’s music that sounds like a Gauguin painting — a raw, powerful, colorful mix of Eastern and Western elements,” says Fiuczynski. He recently ran a groove contest for students to unearth new beats. The best original idea — two beats playing at once, with one speeding up as the other slowed down — won an iPad.
The prestigious Guggenheim Fellowship, a $40,000 award, goes to an artist in mid-career undertaking an important project. His Guggenheim composition is a work to be called, tentatively, “East Asian MicroJam for J Dilla and Olivier Messiaen.” “J Dilla and Japanese court music have some similar rhythm structures,” says Fiuczynski. “Messiaen was influenced by Asian sounds.”
The piece will be recorded by students from Fiuczynski’s new Planet MicroJam Institute at the college, as well as musicians from the greater Boston area. The MicroJam Ensemble is comprised of Fiuczynski on fretted, fretless, and 1/4-tone guitars; and Berklee students Utar Dundarartun and Sang Park on microtonal keyboards; Alex Bailey on drums; and Eli Marcus on bass.
David Fiuczynski’s music is often described as unclassifiable, challenging, and invigorating. In 1994, he collaborated with keyboardist John Medeski of Medeski Martin & Wood on the album Lunar Crush, a tribute to the Tony Williams Lifetime which was chosen by Guitar Player as a Disc of Destiny. His recent music melds traditional melodic elements from the Middle East, Asia, India, and Eastern Europe, with rock, funk, electronica, and other styles. Fiuczynski leads the underground cult band Screaming Headless Torsos and has worked with Jack DeJohnette, Stewart Copeland (the Police), Hasidic New Wave, Hiromi, Meshell Ndegeocello, Vernon Reid, John Zorn, and many more.
The Undead Jazzfest is a new kind of festival. With an incredible array of artists from New York’s new jazz and improvised music community, unorthodox venues, affordable tickets, and no drink minimums, it aims to shake the public perception of what a jazz festival can be. After the success of its inaugural 2010 event, the second Undead Jazzfest has expanded to two boroughs, four nights, eleven venues, and over 50 acts. The Undead Jazzfest is presented by Boom Collective, a New York-based live music booking and production company; and Search and Restore, a non-profit organization dedicated to developing and uniting the audience for new jazz music. For more information, visit http://www.undeadjazz.com.