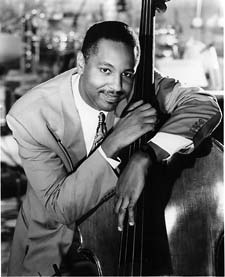 NEW YORK, N.Y – Conversation overheard at the Rose Club of the Plaza Hotel, New York City, between a fifty-something guy with a suit jacket speaking to a pretty, twenty-something girl in a short black cocktail dress, setting up a mixer, speakers, lights and microphone: Guy – “I’m a road manager for rock & roll bands and I have never seen anybody as dressed up as you setting up gear.” Girl – “Yeah well, that’s what jazz in New York City will get you.”

New York City; the Big Apple, the old New Amsterdam, the Place To Be in music and art, is now and probably forever will be Jazz Central. And now bassist extraordinaire Robert Hurst brings his quartet to play four shows at Jazz Standard, one of New York City’s premier jazz establishments. Joining Hurst at these shows will be Lawrence Fields on piano, Rafael Statin on saxophone, and Jeff “Tain” Watts on drums. Watts is widely hailed in jazz circles as the only drummer to appear on every Grammy Award winning record by both Wynton and Branford Marsalis. “Tain” has also manned the drum kit behind George Benson, Betty Carter, and Alice Coltrane, among many others.

Pianist Fields and saxophonist Statin balance the youthful side of the jazz equation with the veterans Hurst and Watts. Statin, a 21 year old wunderkind, hails from Hurst’s hometown of Detroit, Michigan, attended the Detroit School Of Arts and played with the Detroit Symphony Jazz Orchestra while still in high school. Influenced by everyone from John Coltrane to Kenny Garrett and everything from blues, gospel and funk to Asian-Japanese music, Statin brings a wealth of experience to the quartet that belies his age. Fields, a native of St. Louis, is a graduate of the Berklee College Of Music in Boston, Massachusetts, where he played stand-out shows with the 2006 Berklee Monterey Quartet in that California city’s far famed jazz fest. It is a natural for Hurst, a tenured associate professor in the Department of Jazz and Improvisation at the University Of Michigan in Ann Arbor, to bring these young musicians into his band. Robert’s career has long included an educational aspect, teaching younger players by experience and example what a life in jazz on the road has taught him.

Jazz Standard, located at 116 East 27th Street (between Park and Lexington), presents an extraordinary mix of world-class entertainment, pitch-perfect sound and warm hospitality. One of Jazz Standard’s innovations is an earlier start time for sets – 7:30 pm – in order to cater to New York City’s vibrant after work scene. Another enticing feature of Jazz Standard is the award-winning barbecue of upstairs restaurant Blue Smoke that is served at the club, along with their signature specialty drinks, beer, wine and cocktails.

The Robert Hurst Quartet will appear Tuesday and Wednesday August 2nd and 3rd, with two shows nightly at 7:30 and 9:30 pm. More information can be found and ticket reservations can be made at www.jazzstandard.com. Admission is $25. For more information on Robert Hurst, please visit www.roberthurst.com