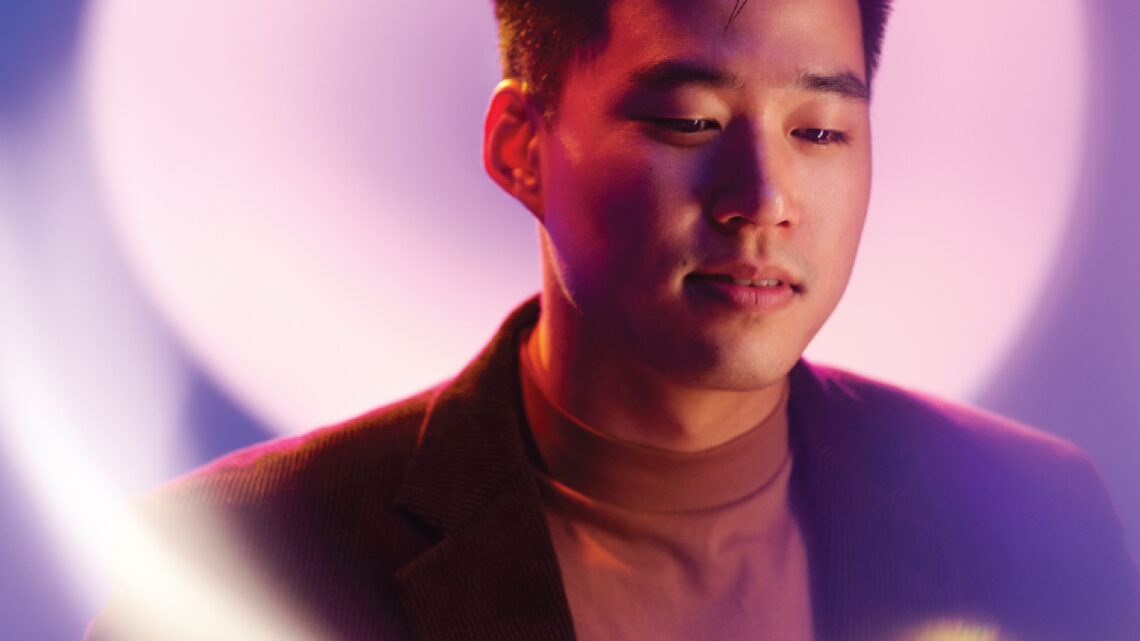 Vocalist Vincent Ding makes a larger-than-life debut with Incredible Views From Above, a scintillating work for big band and strings that inspires generations of the past, present, and future

NEW YORK CITY, N.Y. – Vincent Ding is a bright new flame in the world of vocal jazz. Refreshingly steeped in the traditions of the historic icons like Frank Sinatra and Nat King Cole, Ding blends this rich lineage with a depth of autobiographical authenticity from his Taiwanese-American roots to create music that is both thoughtful and powerfully rooted in hard-driving swing. Backed by an all-star big band and an equally fierce string section and produced by acclaimed vocalist Sirintip, Ding presents a musical debut that is truly remarkable with Incredible Views From Above as he sings to listeners both young and old about the liberating joy that comes from the pursuit of one’s passion.

Vincent Ding was born into a family in which music abounded. From a young age, he began playing piano, which quickly extended to include saxophone, flute, and bassoon. Unfortunately, like so many, Ding was discouraged from the long-term pursuit of the arts for the pursuit of that which was more tangibly profitable. It was not until after establishing a successful career for himself in real estate that he began to realize the disconnect between what he was doing and where his passion was found. In 2020, tired of his day job and yearning for something more, he began taking vocal lessons with Sirintip. Fueled by excitement and purpose, Ding’s career began to boom and he decided it was time to take this vivacity into the studio.

Stepping into the world of recording, Ding knew he wanted his debut to be something that did not merely showcase his own skill, but would inspire others to pursue their dreams through his own infectious joy. The album Incredible Views From Above focuses in on these ideas of the pursuit of one’s craft, overcoming hardship, and the discovery of self as an outpouring of the learning process. The album thematically follows Ding’s life journey over the past 22 years as he transformed from a past wrought with bullying and debilitating self-doubt to emerge the joyful, vibrant artist he is today. Using masterfully wrought orchestrations for his 25-piece ensemble of big band, strings, and harp, Incredible Views From Above marks a powerful milestone in Ding’s lifelong goal to encourage the youth to chase their aspirations and the old to breathe new life into their ambitions of the past.

The thematic turning point of the album occurs with Ding’s rendition of the standard deeply associated with Frank Sinatra: “My Way”. “My Way describes my love-hate relationship with music growing up,” Dings says. “Knowing at an early age that my parents would’ve never agreed to me pursuing music in college, I took music for granted after middle school but always had in the back of my mind the thought of releasing my own music one day, just to prove them wrong.” The timeless lyrics of the song echo many of the themes Ding had experienced in his own life, particularly as he turned from the familiar and jumped headfirst into the world of creative music. Reflecting ideas of turning regret into positivity and the rewarding end result of individualism, “My Way” provides an almost biographical anecdote for Ding as he champions the joy of finding fulfillment in creativity. The themes present in “My Way” are further explored in the corresponding narrative music video. Where many in the jazz world fall back on studio videos, Ding, as a part of his goal to inspire listeners from a broad genre background, put together a music video featuring a storyline. Utilizing two versions of the concept of self connected through time via a dancer, the video extrapolates on the themes present in both the song and the album, creating a unified call for the audience to pursue that which will give their life meaning.

Ding’s brilliance shines not only through the music but also through his optimistic carpe diem approach to the album. Where many musicians saw the dissolution of live music during 2020 as an impossible hurdle, Ding jumped at the chance to build an ensemble of top-tier performers from a plethora of locations who otherwise might not have all been present together in the same studio. Each of the musicians recorded their parts individually, and these sonic elements were then mixed by the GRAMMY-winning audio engineer Nic Hard. Incredible Views From Above features woodwind players Alex Hahn, Steve Kortyka, Camille Thurman, Owen Broder, and Chris Lewis; trumpeters Bijon Watson, John Lake, Chloe Rowlands, and Danny Jonokuchi; trombonists Jon Hatamiya, Kalia Vandever, Ronald Wilkins, and Becca Patterson; pianist Kengchakaj Kengkarnka; bassist Daniel Foose; drummer Nolan Byrd; and string players Maria Im (violins), Nathan Schram (viola), Andrew Yee (cello), and Brandee Younger (harp).

With Incredible Views From Above, Vincent Ding creates a remarkable statement not only as a vocalist and musician, but as an artist. Through this album, Ding has presented the incalculable power that the pursuit of one’s passion has on one’s life and has shown the very real nature of achieving one’s goals. Whether an old swing fan or new, whether a young dreamer or seasoned nostalgic, Incredible Views From Above is an invigorating listening experience on all levels.

Incredible Views From Above releases on Next Level on July 8th, 2022.