Muntu Valdo: The One & The Many 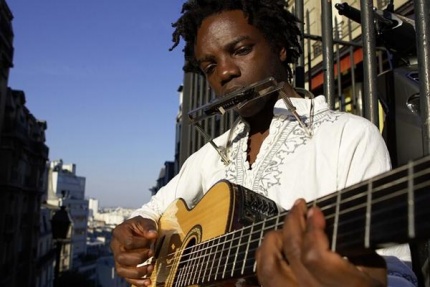 The word maverick is bandied about quite liberally when describing the talents of the young London-based, Cameroon-born singer-guitarist-composer, Muntu Valdo.

This spring, he released “The One & The Many” on the Warner Jazz label to critical acclaim – a truly inventive CD that combines his ethnic Sawa roots, with attractive vocals, and a one-man arsenal of electronic loops, acoustic guitar and harmonica. It’s a highly rhythmic concoction integrating aspects of the blues, Afrobeat and bewitching percussive patterns. Muntu has toured extensively and played alongside the likes of Ali Farka Toure, Keziah Jones and Manu Dibango, among others.

In this expansive interview, Muntu Valdo talks about his Sawa music roots, the messages carried in his recent CD, and how he came to play harmonica.

John Stevenson: What is the meaning behind the title of your new CD, ‘The One & The Many’?

Muntu Valdo: ‘The One & The Many’ is a formula, a concept, a message. As a musical formula, it’s a showcase of my ability through my different instruments to be different members of the same band at the same time, simultaneously live on stage. As a concept, it’s a way of evoking the idea of myself as an artist who relies on the use of many materials, many colours, many visions, and many generations of ideas to create a single piece of art. It also highlights the fact that deep inside the soul of each and every one of us we all have the qualities, attributes and power to participate in harmonious construction. As a message, I would like people to remember that we are all connected to each other, to animals and to nature, everything we do as individuals has a consequence be it here or elsewhere, whether we are conscious of this or not. It’s also a message to the youth, especially the African youth, who don’t always have access to a lot of means. I’d like to tell them that even if you don’t have the financial or personal situation you would like in order to achieve a project … don’t give up! Focus your energies on trying to do everything you can at the level you can. Nothing is impossible. Belief, patience and hard work can enable us to unleash the power of the many inside each and every one of us.

JS: The Afro-Francophone music vibe in Paris is pretty pervasive and no doubt would have affected your evolution as an artist. What attracts you to the London music scene? Do you miss the Paris scene?

MV: Yes, I do miss the Paris scene. I made a lot of good friends in Paris, and knew a lot of great musicians and venues there. Paris feels a lot smaller than London so it’s perhaps easier to feel connected there. However, I love the London scene now. It has something special, something incredibly dynamic, rebellious and funky.

JS: Cameroon has produced a large number of influential musicians and singers in recent decades. Manu Dibango, Armand Sabbal Lecco, Etienne M’Bappe, and of course, Richard Bona, to name a few. Why do you think audiences are drawn to various kinds of music coming out of the Cameroon?

MV: I don’t really have the answer, but I think the musicians you mention are not just good Cameroonian musicians but simply very, very, good musicians! I think that if the music is good, it will always resonate positively with an audience no matter where the musicians are from. Having said that, I can add that in Cameroon (“Africa in miniature”) you have a very large variety of rhythms, cultures and languages. When musicians are able to capture and communicate all these riches within their music, the result can only be pure quality.

JS: What are the basic elements of ‘Sawa Blues’? Are there other musicians who play it?

MV: The basic elements of Sawa Blues are the true musics coming from the depth of the Sawa region, which runs along the coast of Cameroon. Music and rhythms like ‘Esewe’, ‘Bolobo’ or ‘Ngosso’ to name just a few, are part of the cultural identity of the Sawa people, and form the basis of Sawa Blues. Some well-known past musicians played it before me, and some musicians of today continue to play it. However, it’s a music that people have played without necessarily giving it a name. In the past people would have just referred to it as “a different music” an “alternative music” to the very urban, popular and clubby Makossa music, which is dominant in Cameroon. This inspired me to come up with the concept of Sawa Blues, and it’s a term that’s starting to be recognized. So, just to name a few, I can list people like Charles Lembe, Eboa Lottin, Francis Bebey, for the past, as well as people like Richard Bona, Coco Mbassi, who are also doing something that is similar.

JS: There’s a definite Afrobeat rhythm on ‘Musseing’, right down to the little faux Hammond organ harmony in the background. What does ‘Musseing’ mean?

MV: Musseing means ‘Interest’. Fela Kuti and his Afrobeat rhythms were a huge part of my influences growing up in Cameroon, which borders Nigeria to the west.

JS: You remind me of the half-Cameroonian singer-guitarist Prince Nico Mbarga, whose ‘Sweet Mother’ became a massive hit in 1977 – the year you were born. Like Prince Nico, your guitar stylings meld West African and Congolese influences. How pervasive is the Congolese cultural influence in Cameroon?

MV: I was, and still am, a huge fan of Prince Nico Mbarga who sadly passed away a couple of years ago. Yes, both his music and Congolese music in general, along with other western music have played a great influence on me. These are the musics that surrounded me when I was growing up, playing on radio all the time.

JS: Who were your own musical influences while you were growing up?

MV: I could not say my own musical influence because both my music and me are the result of a multitude of so many different influences from all over the world, due to the special cultural situation of Cameroon. Officially, and as a result of colonization, we speak two western languages, English and French, the north of the country is Muslim with a big Arabic influence and background and then as well as this we have the traditional Bantu and Sudanese cultures. Thanks to this huge diversity, all sorts of music from almost all the genres possible have always surrounded me!

JS: It isn’t common to come across harmonica players from Africa. How did you come to take up the instrument?

MV: It’s a pure coincidence, a friend of mine had one as a toy, and I was intrigued by how such a small instrument like this could produce so many sounds and I just fell in love with it.

JS: You were injured during a student protest while you studied at Yaoundé University? What are your thoughts on music as a tool for social protest?

MV: I believe that music’s power to reach millions of people very easily and quickly makes it a great tool to share a message. It has the potential to be used with great effect in social protest but also as propaganda.

JS: What are your thoughts on the consumption of your music (and music like the one you play) in Cameroon? Is there a big enough, and solvent enough audience there to support the music? What are some of the challenges facing the music industry over there?

MV: To be honest, the style of music I’m playing is not mainstream in Cameroon. In general people are more interested in Makossa, which is a festive, party music. Having said that, there are more and more people interested in this kind of music thanks to its quality and the quality and the talent of the high profile artists who produce it. People like Bona, M’Bappe, myself and many more are starting to get the recognition they deserve. Maybe there’s a new wind, a new trend coming? A lot of young people are starting to be more curious, so in that respect I’m very positive about the future. Slowly, a large following of fans is growing everyday in support. In terms of the music industry, I think it would be fair to say that it’s completely on its knees in Cameroon. Unfortunately piracy is the king, and it’s very difficult to see how this is going to change.