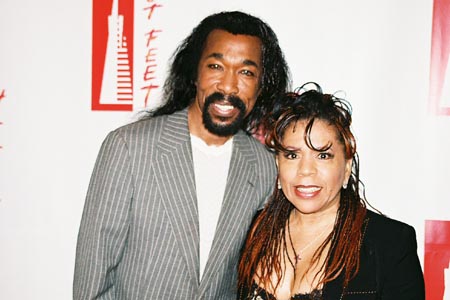 NEW YORK — Nick Ashford, one-half of the legendary Motown songwriting duo Ashford & Simpson that penned elegant, soulful classics for the likes of Diana Ross and Marvin Gaye and funk hits for Chaka Khan and others, died Monday at age 70, his former publicist said.

Ashford, who along with wife Valerie Simpson wrote some of Motown’s biggest hits, died in a New York City hospital, said Liz Rosenberg, who also was Ashford’s longtime friend. He had been suffering from throat cancer and had undergone radiation treatment, she said.

Though they had some of their greatest success at Motown with classics like “Ain’t No Mountain High Enough” and “Reach Out And Touch Somebody’s Hand” by Ross and “You’re All I Need To Get By” by Gaye and Tammi Terrell, Ashford & Simpson also created classics for others, like the anthem “I’m Every Woman” by Khan (and later remade by Whitney Houston).

They also had success writing for themselves: Perhaps the biggest known hit sung by them was the 1980s hit “Solid As A Rock.”

Ashford and Simpson’s relationship stretched more than four decades. They met in 1964 in a New York City church; Ashford, a South Carolina native, had come to the city to pursue a dance career. Simpson was a music student, and after connecting with her, they decided to start to write songs together.

Their first major success occurred when they came up with “Let’s Go Get Stoned” for Ray Charles. That song became a huge hit, and soon, they came to the attention of Motown Records and began penning hits for their artists. The started out writing for Gaye and Terrell; in fact, “Ain’t No Mountain High Enough” was originally their hit, until Ross later rerecorded it and made it her signature song.

The duo, who were married for 38 years, helped sell millions of records for several artists. They also had success as their own entity, but despite “Solid As a Rock,” their hits dwarfed those that they penned for others.

In recent years, the pair continued to perform. They also were owners of the New York City restaurant Sugar Bar, where many top names and emerging talents would put on showcases.

Ashford is survived by his wife and two daughters.

Copyright 2011 The Associated Press. All rights reserved. This material may not be published, broadcast, rewritten or redistributed.