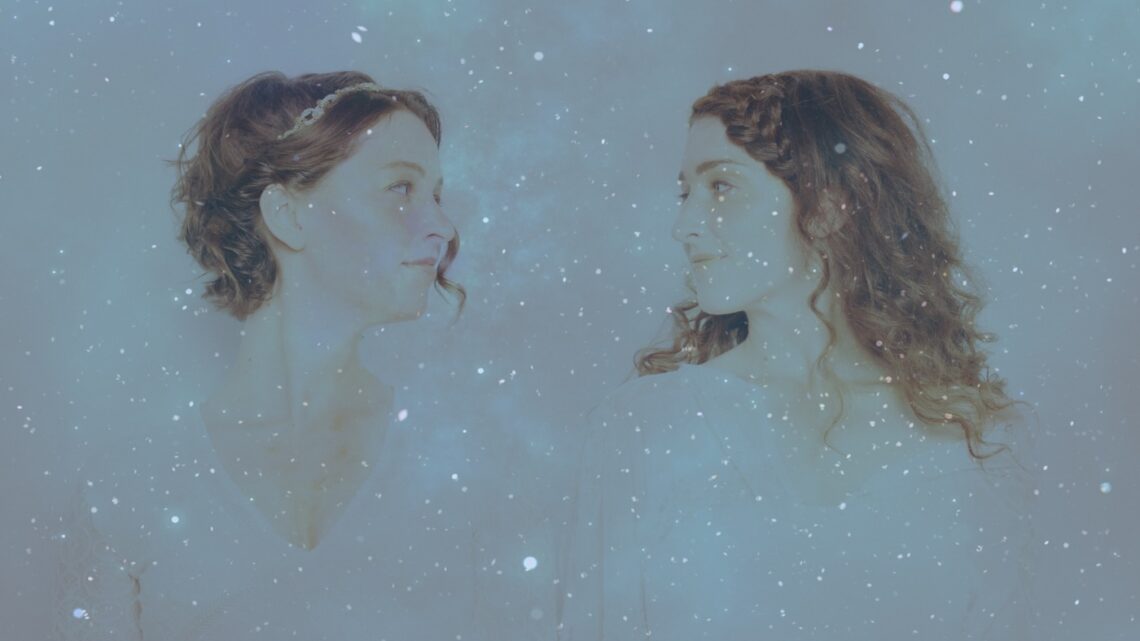 Critically-acclaimed singer-songwriter duo The Arrow and The Bow, featuring the angelic voices and ethereal lyrics from Hillary Reynolds and Hannah Lou Woods, have announced their long-awaited return with the release of their first single in nearly five years. “Universe” (High Vibe Records) will be available Monday, November 15 on all DSPs and, according to the pair, it is the first of a new collection of songs.

Describing the track as more “raw and Earthy” than past songs with an “eclectic folk/world/pop vibe,” Reynolds and Woods say “Universe” was initially penned in 2016 for theirself-titled, debut EP. However, with only vocals and drums, they felt it didn’t fit with their eponymous release and decided to hold on to it – until now.

“Hillary and I wrote ‘Universe’ hoping to empower others. To help listeners believe in themselves and have the courage to take those next steps to do something that maybe scares them; something outside of their comfort zone,” said Woods. “In these particularly uncertain times, it seemed serendipitous that this song was on both of our minds at the SAME time after all these years. That’s when we knew we had to release it.”

“Universe,” which was recorded at Ugly Duck Studios (Boston, MA) and co-produced with Dave Chapman, is the first in a new collection of songs from The Arrow and The Bow. The pair is currently in the early stages of recording their second single which is slated for a 2022 release. The forthcoming assortment of music will be their first since their debut album The Arrow and The Bow (2016), which catapulted them to the top of the indie singer-songwriter scene.

However, while the duo has not released music together in over five years, they have been busy writing and recording as solo artists and for other bands and musicians. In fact, Reynolds co-wrote one of Little Big Town’s hits from their 2020 #1 Billboard-charting album Nightfall and found success with her 2021 single “What Faith Is,” which garnered critical acclaim including Skope Magazine who wrote:

“Hillary Reynolds is a vibrant singer/songwriter who has graced us with her touching performance on the blessed, new single titled ‘What Faith Is’. The song is all about hope and ‘What Faith Is’ is a bright spark in today’s wild world.”

Woods was also busy unveiling new music in 2021 with her electronic folk/pop duo We Saw Lions. The pair released their sophomore EP Flesh & Bone (High Vibe Records) to critical and fan acclaim, which helped propel them to 80,000 monthly listeners and over 2.4 million streams on Spotify. The album’s debut single “Skeletons” was so revered by critics that The Deli Magazine heralded it as:

“An impressive debut, both vulnerable and optimistic. Woods’ vocal performance is pitch-perfect in tone and character, and Chapman’s production is present and supportive, without ever being heavy-handed.” (Brian Varneke, The Deli Magazine, Boston and New England)

Prior to Flesh & Bone, We Saw Lions went viral with their hit single “Cellular Upgrade (We Saw Lions Remix)” (2020), which now has 2.3 million streams on Spotify, and enjoyed success with their debut EP Wake Up (Jumpsuit Records; Ayla Nereo, Polish Ambassador).

Yet, even after being apart, now that they are back together again, The Arrow and The Bow say they feel as if they haven’t missed a beat.

“After five years of waiting, we finally felt like it was the right time to release ‘Universe’,” said Woods. “We are already in the beginning stages of co-producing our next single and exploring remote recording with each of us in different locations. Everything is naturally falling into place, just as it always has.”

For more information about The Arrow and The Bow visit https://www.hannahlouwoods.com and https://www.hillaryreynolds.com.

About The Arrow And The Bow

The Arrow and The Bow is Hillary Reynolds and Hannah Lou Woods, two acclaimed singer-songwriters, who joined forces on a musical journey to explore the healing and heart-opening power of music, meditation, yoga, and travel.

Their angelic voices and intricate songwriting weave a world of reflection and inspiration. Their self-titled debut album was released in 2016 to critical and fan acclaim, launching them to the forefront of the indie singer-songwriter scene.

Reynolds and Woods are also renowned solo artists as well as revered songwriters and members of other esteemed musical acts. Reynolds, who is most widely-known as the co-writer for one of Little Big Town’s hits from their 2020 #1 Billboard-charting, Grammy-nominated album Nightfall, most recently released the powerful single and video for “What Faith Is,” during the midst of the 2021 Pandemic. This was her first solo effort since her 2012 self-titled debut EP. Since then, she splits her time between LA and Nashville, songwriting and collaborating with artists and writers such as Honey County, Michael Jade (Warner Chappell), Rory Andrew (WYNNE), as well as film composers such as Andy Forsberg for scores/songs in feature film projects for Lifetime, Netflix and Amazon Prime.

Hannah Lou Woods, who also released new music in 2021 including an EP entitled Flesh & Bone (High Vibe Records) withher electronic folk/pop duo We Saw Lions, is an award-winning Berklee College of Music graduate and nationally-touring artist. Best known for her hit single with We Saw Lions“Cellular Upgrade” (2020), which now has 2.3 million streams on Spotify, and her tenure working with Jumpsuit Records for the duo’s debut EP Wake Up, Woods’ career is as eclectic and dynamic as the singer-songwriter herself.

As a solo artist she has released two independent albums The Part That Knows and Grow The World You’re Dreaming Of  that were funded by her fans on Kickstarter under the name Hannah Christianson. Her song “A Hundred Hearts” has been used in wedding videos all over the world and her single “Spirit Eyes” has been sung by the all-female world music group Women of the World on various continents.

Woods has also shared the stage with such artists as Jen Chapin, Raining Jane, Couer De Pirate and Emily Elbert. Woods was also a finalist and winner in numerous songwriting competitions such as the John Lennon Songwriting Contest and Great American Song Contest.

Next post Giants of Contemporary Jazz in Maplewood, NJ December 17