Rub Out The Word: A Conversation With Elliott Sharp 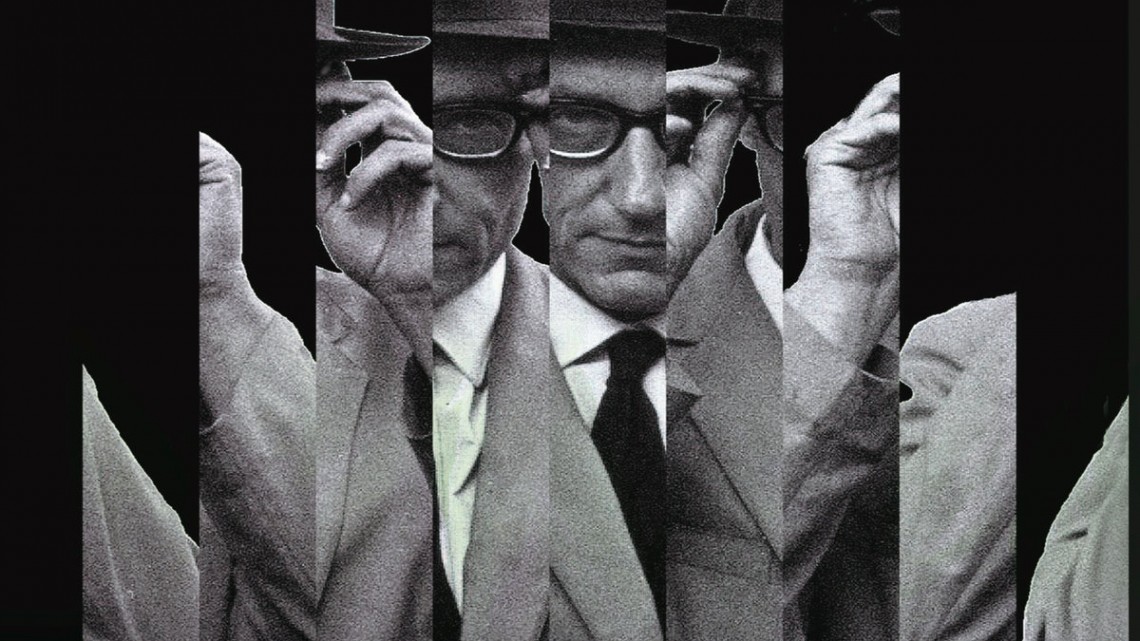 Performed by actor/director Steve Buscemi and multi-instrumentalist/composer Elliott Sharp, Rub Out The Word (Infrequent Seams) is an ambitious recording of the spoken texts of works written by William S. Burroughs.

The performance took place on April 21, 2014 at the Issue Project Room as part of the final week of WSB100, celebrating the 100th anniversary of the iconoclastic author’s birth and controversial works such as Naked Lunch.

Burroughs (co-creator with Jack Kerouac and Allen Ginsberg of the Beat Generation) is credited with introducing words such as ‘Heavy Metal’, ‘Steely Dan’ and ‘Soft Machine’ into the lexicon.

This recording captures an inspired performance; Sharp’s highly atmospheric use of the electric guitar and Buscemi’s authoritative  narrative voicings of the cut-up texts breathe life into Burroughs’ riff-like turns of phrase.

I caught up with Elliott recently for a chat about Burroughs and his influence on contemporary culture, tape collages and millennial mashups – among other things.

John  Stevenson: William Burroughs was a complex and multi-layered person; these traits were certainly communicated through the characters and approaches he employed in his literary works. How much of his work did you absorb to perform the music on Rub Out The Word?

Elliott Sharp: I’ve been reading Burroughs since 1968 when, as high school students, we would pass around well-worn copies of “banned” books such as Naked Lunch and Junkie by Burroughs samizdat-style as well as other ‘beat’ writers Kerouac, Ginsberg, and Corso plus Richard Fariña, Terry Southern, et al. Kerouac, Ginsberg, and Burroughs used to live in the building in the East Village where my studio has been located since 1980, so I’ve long felt a certain continuity with that scene.

JS: Your approach to the guitar has been singular and unique over the last three decades. On Rub Out The Word, the ethereal meets the industrial as you literally beat sounds into shape – especially on “The Human Virus” and “The Writer”.  The harmonic hammer meets the literary anvil. What were your axes on this project?

ES: Because of Burroughs’ use of the term Heavy Metal long before it became a rock signifier, I used a Rogue Aluminator guitar for this project, mainly for the look – a knock-off of the unique Abel Axe – with a body made from aircraft billet aluminum. It sounds quite unique and plays well. It was routed through a Digitech RP250 that I had programmed with my own patches and which was also used as an interface to send audio into my laptop. The laptop was running Ableton Live to playback samples that I had created from guitar and other instruments as well as shortwave radio and television, and also to process my live guitar sound through various plug-ins. My sound in the hall was taken from 2 DI’s on the Digitech and 2 DI’s on the laptop and heard through monitors onstage and in the house.

JS: Wichita Vortex Sutra is the 2004 collaborative commemoration of Allen Ginsberg’s poem (now half a century old) which you played guitar on. How has this project influenced Rub Out the Word, if at all?

ES: Not really – I’d worked with spoken-word artists and theater productions for many years before that one and feel that I’ve evolved an approach to create music that underscores the text while providing commentary and crosstalk.

JS: Burroughs popularised the literary cut-up technique which in its own way has had an influence on the contemporary millennial ‘mashup’ culture we now live in, largely mediated by the internet and social media. To what extent has this influenced your own oeuvre?

ES: Using Brion Gysin’s cut-up technique, I was able to apply it to tape collages and in live improvisations back in the 1970’s. There was a group in Buffalo that I would jam with on occasion, Random Access, that very much embodied the cut-up technique using tapes, turntables, radio, poetics. A good example from my own work is Sample/Hold which was made from snippets of cassette recordings of every performance of my band I/S/M from November 1981-September 1982. This was made using the traditional musique concrete approach of cutting tape. Musique concrete may be considered very much a parallel development to Gysin’s cut-up technique. Sample/Hold was released on the compilation Peripheral Vision: Bands Of Loisaida on zOaR in 1982.

JS: As you reflect on the counter-culture of the turbulent 1960s and American society today, would you say Burroughs’ literary voice speaks louder to us now?

ES: Certainly we live in a dystopian society possibly more frightening than Burroughs’ most nightmarish visions. We have to use his writing not as prophesy but as a tool to comprehend and push back against the misery inflicted on most of the world’s humans by the powers-that-be. Burroughs is one of many voices extending back centuries that will not accept the simple “givens” that reduce the human condition to need, fear, and pain.

JS: How has the experimental, avant-garde New York City scene changed over time? Has gentrification taken its toll on this kind of artistic expression?

ES: It seems to me that the “avant-garde scene” has very much disappeared though there are still many many talented people making art in every media. The issue is context and that has changed greatly in NYC which, like London or Paris, has become a “museum city” with artists priced out of the neighborhoods that they were instrumental in rendering livable through their creative work. The fact that NYC has essentially become a shopping mall for culture is also reflected in the disappearance of the “middle class” from American life. The middle was a place of mobility. People are at the top (very few) or mostly inhabiting the vast “bottom”. Now we see a few artists ordained and marketed as if they were the only ones who count and the great diverse crowd of brilliance is ignored or even suppressed.

JS: What was the specific vibe at the Issue Project Room (during the final week of WSB100 in 2014) which encouraged you to record and release this project – or was that the intention from the beginning?

ES: The vibe was crackling as we hoped it would be! Everything in the series was recorded for archival purposes but there was no plan to release it but the concert went so well and the reception was so strong that I was hoping the recording would do it justice. Fortunately, it captured the event quite well enough that with a touch of ProTools tweaking, it was good enough to release.

JS: Will Rub Out The World spur you on to collaborate on similar projects – Lawrence Ferlinghetti’s ‘A Coney Island of the Mind’, for instance?

ES: If such projects come up, I’d be happy to dig in to them! I’ve worked with many spoken-word artists over the years and will always be happy to continue. This work is mostly captured in the albums that have now been collected and released as The Yahoos Trilogy. Steve Buscemi is represented here with our first collaboration setting Burroughs. In a related vein, much of my recent focus has been on opera. Port Bou, an opera about the suicide or Walter Benjamin in 1940 as he was escaping Nazi Germany, will be released this fall, also on Infrequent Seams. I continue to work on Substance, an opera about the philosopher Baruch Spinoza. Finally, my 2009 opera Binibon about the murder of the Binibon night manager Richard Adan by prison writer Jack Henry Abbott, will be performed again in October at White Box gallery in Manhattan.

JS: Will you bring Rub Out The World to the UK and Europe?

ES: If concerts can be organized, we will be happy to!

JS: What are your future projects with Terraplane and Orchestra Carbon?

ES: Both Terraplane and Orchestra Carbon are on the back burner at the moment. Related to Terraplane though, is my upcoming release Fourth Blood Moon for the German label Enja Yellowbird. It’s a studio creation of loops and overdubs but with Eric Mingus singing on every track with lyrics by the both of us. That project will tour in 2017 but in a band format with bassist Melvin Gibbs and drummer Don McKenzie. There is also talk of a European tour for my Aggregat project, more defined as “jazz” than anything else that I do. The latest album, Dialectrical, will be released on Clean Feed this fall and features Barry Altschul on drums with Brad Jones-bass, Taylor Ho Bynum-trumpet, Terry L. Greene II – trombone. I only play reeds on this album.