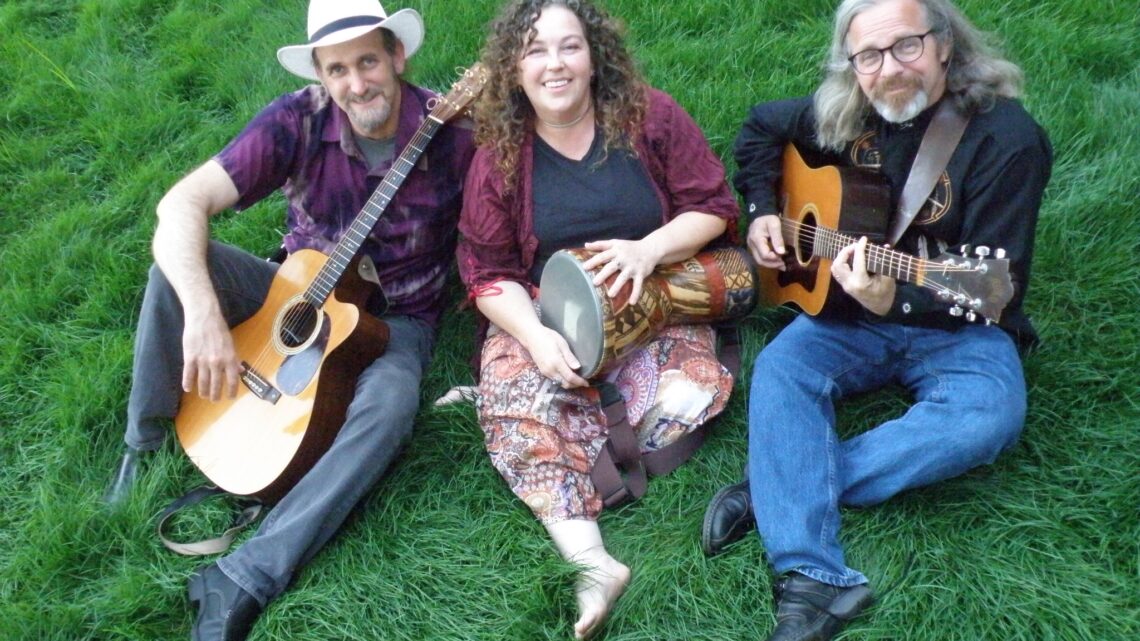 Protest marches. Riots. Contentious and divisive politics and a public divided along partisan lines. If it seems like America has suddenly been thrust back into the late 1960s, one band has the soundtrack for it. Gathering Time, the acclaimed Long Island-based folk-rock harmony trio that traces its musical roots to that generation-defining decade, has announced the release of their new album Old Friends on Tuesday, September 1. Available on all DSPs, the CD will feature reimagined and re-harmonized classics from the era when folk met rock ’n’ roll.

Among those is the iconic 1969 Youngbloods song “Get Together,” which the trio released as an advance single and has earned the #1 spot on The Folk Alliance International Folk DJ Chart for the month of July, 2020. Deciding to release the track in response to the Black Lives Matter protests, the racially charged reactions, the riots and the sometimes vitriolic polarization of public health, Stuart Markus, the group’s rhythm guitarist said, “It seemed a message that needed to be heard again, that what unites us is greater than what divides us, and that our better angels are stronger than our worst demons as a society. He added, “We are ecstatic that it has been so well received– we can’t thank the folk DJs enough for their support.”

To celebrate the release of Old Friends and its debut single, the trio will be performing a special CD release concert hosted by the Huntington Arts Council at the Huntington Heckscher Park, on the Harry Chapin Rainbow Stage (NY-25A & Prime Ave, Huntington, NY 11743),Saturday, August 15 at 8 PM ET. This much-anticipated event will be reserved for Huntington Town residents only yet will be livestreamed via Gathering Time’s Facebook page (www.Facebook.com/gatheringtimeofficial).

“We are thrilled that this concert opportunity has come up on such a prominent stage,” said Markus. “We’ve had a very special relationship with the Huntington Arts Council for a dozen years and they’ve paid us a huge compliment in tapping us to play for their re-christened ‘Summer Of Hope’, which had been so impacted by the pandemic. Even more so that they’ve asked us to play originals alongside the songs from our new album. And we’re doubly excited at the prospect of a worldwide audience via the webcast.”

If the timing for the album seems fortuitous, they hadn’t planned it that way. “We actually started working on the record almost three years ago,” said Markuswho shares bass guitar, lead and background vocal duties with bandmates Hillary Foxsong and Gerry McKeveny “After the success of our last original CD, Keepsake, which took the #1 album, single, and artist honors on the Folk DJ Chart in March, 2016, we wanted to do one in tribute to the artists who influenced us, like The Byrds, Peter, Paul & Mary, Simon & Garfunkel, Joni Mitchell, and Crosby, Stills & Nash.”

One thing that was a deliberate decision, according to the band, was to include a number of socially conscious songs from the era that have gained renewed relevance to current times. “Turn! Turn! Turn!” leads off the album. “It speaks to the fact that life runs in cycles and history is like a pendulum,” Markus said. “What we’re going through now, racial strife, civil unrest, economic and political crises, we’ve endured as a nation and a society, and as a human race, before. We can get through this — hopefully emerging the better.”

When the trio started the album, it seemed like it would be a fairly straightforward recording process. Most of the material was songs they had cycled regularly in and out of their live sets and knew down cold. “But then someone would come up with a new groove on a song, or we decided to take advantage of the studio capabilities and add extra harmony tracks”, Markus said. “We had tours and specialty shows that required rehearsing which took away from recording time; the studio computer had a hard-drive melt-down and needed to be rebuilt; family issues came up; one of our members’ day-job schedule got onerous. After a while it felt like some unseen force was holding us back saying, ‘It’s not time to release this just yet.’”

Other songs on the album include “Abraham, Martin & John,” an elegy to assassinated leaders who took strong stands on civil rights; “At 17,” which addresses the issue of teenage rejection and depression and “Hazy Shade of Winter” and “River,” which speak to feelings of disconnectedness and loneliness during the holiday season.

Not that it’s all heavy and serious. “You Were On My Mind” is about the unbridled joy of falling in love while “Hurry Sundown” is about the need to put work down, enjoy leisure time and recharge to face tomorrow. The album ends on a positive note with CSNY’s “Carry On” with its promise “Love is coming to us all”.

Old Friends is Gathering Time’s fifth studio album and was recorded at Wrong Side of the Tracks Studio in Oyster Bay, NY. It was produced by the trio with engineer Ted Stoforos. Their most recent album, Keepsake, took the #1 album and single honors on the Folk-DJ Chart in March 2016 and received #1 artist honors that same month with six songs in the top-25. Their previous releases also charted in the top five with When One Door Closes … hitting #3 on the Folk-DJ Chart for January 2014 with three songs in the Top-20 and Red Apples and Gold landing at #5 on the Folk DJ Chart and #12 on the Roots Music Report Folk & Roots Country Chart for October 2012.

The official track listing for Old Friends is:

If You Could Read My Mind (Lightfoot)

You Were On My Mind (Fricker)

And When I Die (Nyro)

Next post Dan Liparini’s Tessellations” bridges the gap between paying homage to the legacy of the past and staying true to one’s own voice.