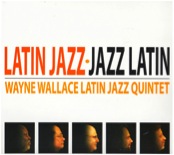 “Gorgeous playing dominates along with highly inventive arrangements. Wallace’s trombone shifts easily from a seductive, warm ballad style to powerful statements on uptempo tunes. Every track offers a surprise and plenty of chops to back them up.” — Marc Myers, JazzWax

World-renowned trombonist, composer, arranger, and producer Wayne Wallace has earned a GRAMMY nomination for “Best Latin Jazz Album” for his CD Latin Jazz / Jazz Latin his seventh CD on the Patois label. The CD, which topped the radio charts and earned rave reviews and a place on numerous top CDs of the year lists, displays all the thrilling interplay, melodic invention, and blazing improvisational flights that distinguish his music. Every tune reflects the flow of rhythmic currents between Caribbean and African-American communities. The project features The Wayne Wallace Latin Jazz Quintet with special guests including 77-year-old percussion patriarch Pete Escovedo and 17-year-old rising flute star Elena Pinderhughes, plus violinists Mads Tolling and Jeremy Cohen.

This is the second Grammy nomination for “Best Latin Jazz Album” which The Wayne Wallace Latin Jazz Quintet has earned and the sixth time Wallace — a San Francisco native now splitting his time between the Bay Area and the Midwest where he’s a professor at Indiana University’s Jacobs School of Music — has been nominated for a GRAMMY for one of his own projects.

“This is a tremendous honor,” says Wallace. “All the members of the quintet and I are deeply thankful for the consideration of the Recording Academy, as well as the support of our families, musical peers, and our extended family in the community. We very much appreciate your continued support.”

In a career spanning four decades, Wallace has collaborated with a dazzling array of artists including Count Basie, Ray Charles, Joe Henderson, Carlos Santana, Lionel Hampton, Earth Wind & Fire, Sonny Rollins, Aretha Franklin, Tito Puente, Lena Horne, Stevie Wonder, John Lee Hooker, Earl “Fatha” Hines and cellist Jean Jeanrenaud. Wallace was a driving creative force behind some of the Bay area’s most creative ensembles, including the Machete Ensemble, and Anthony Brown’s Asian American Orchestra. One of his generation’s most eloquent trombonists, he’s been named in DownBeat polls as a leading force on the horn. Known to many as “The Doctor” for his production skills, Wallace is also a lauded composer and educator. He heads up Patois Records, which has released a rapidly growing catalog of acclaimed CDs.

The Grammy Awards ceremony will take place on Sunday, January 26th, 2014, in Los Angeles. For a complete list of nominees for the 56th annual GRAMMY Awards go to http://www.grammy.com/nominees

Here’s what some journalists said about Latin Jazz / Jazz Latin and about Wallace:

“Trombonist Wayne Wallace and his Latin Jazz Ensemble have a well-oiled record-making machine that seems incapable of turning out a subpar album… Wallace’s trombone recalls the great trombone sections of the great Latin conjuntos, while his solos have the panache and lyrical intelligence of the late trumpeter Clifford Brown’s improvisational style.” – Jeff Dayton-Johnson, All About Jazz

“Wallace’s dazzling and spirited arrangements of both his own substantial compositions and four jazz classics help to make this album one of the most significant in Latin jazz so far this year.” – Scott Albin, JazzTimes.com

Five stars. “For the Latin jazz scene it is a pleasure to have a new piece from the brilliant composer and musician Wayne Wallace. This time around the five-time Grammy Award nominee brings us Latin Jazz / Jazz Latin, a powerful and tremendous ten-themed album where he showcases his incredible knowledge and his great playing, composing and arranging.” – Oscar Montagut, Latin Jazz Network

“Wallace… seems to have concocted the right formula to keep you moving while slipping in a little education too. Latin Jazz / Jazz Latin is an absolute joy from start to finish.” – Stuart Kremsky, Mr. Stu’s Record Room

“Yet another triumphant project from trombonist, composer, and bandleader Wayne Wallace, whose quintet continues to display a quality that is the holy grail of Latin jazz ensembles: the fiendishly difficult juxtaposition of utter tightness and rubbery looseness that makes Afro-Latin grooves possible… Highly recommended to all fans of Latin jazz.” – Rick Anderson, CD HotList

“San Francisco-based trombonist Wayne Wallace had the cojones to call his latest album Latin Jazz / Jazz Latin. That’s okay, because Wallace has the musical talent to back it up.” – Curtis Davenport, Jazz Inside

“If you have a hankering for Latin music that will set you soul on fire and cause you to dance around the house, Latin Jazz / Jazz Latin is what you want. As he has done throughout his career, Wayne Wallace hits all the right notes, ably supported by his fine Quintet.” – Richard Kamins, Step Tempest

“Horns, percussion and danceable rhythms are an essential combination for Latin jazz. Add to that stellar performances from all players, including guest musicians, and a biographical sketch of each song, and you get Latin Jazz / Jazz Latin.” – Woodrow Wilkins, The Jazz Writer

“The repertoire, instrumentation and even the generations of participants speak to the whirling, cyclical energy of the genre. A deft blend of jazz standards and originals provides the platform for Wallace’s soaring and soulful artistry.” – Jim Byers, Port of Harlem

“Wallace has been perfecting the small-combo Latin-jazz vibe for many years, and each new album is a delight. The ensemble’s 2013 release is called simply, and accurately, Latin Jazz / Jazz Latin. Once again, the group displays a mastery of the various rhythms of the Latin side of their double helix, while soulfully bringing jazz with the other strand.” – Jeff Dayton-Johnson, KUSP Featured Album August 2013