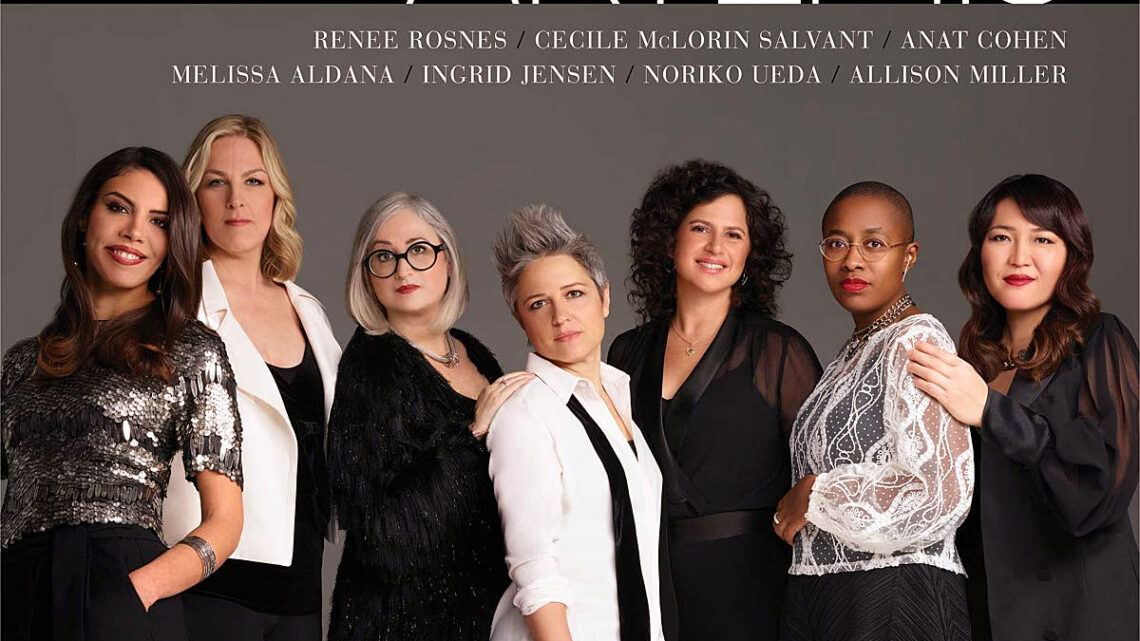 When Blue Note Records president Don Was heard the originality, cohesion and virtuosity of the band Artemis at the 2018 Newport Jazz Festival, he lost no time in signing the group to the legendary label, as he has with jazz talent heard at other jazz festivals. This person responsible for recording young talent like Ambrose Akinmuisire and Kandace Springs, or for recruiting to the label jazz icons like Dr. Lonnie Smith, Charles Lloyd and Bill Frisell, has been selectively recognizing important artists who enhance Blue Note’s unparalleled reputation, and Was had no doubt that Artemis fit in.

All of Artemis’ seasoned members had already developed widely praised musical careers of their own. Their wide ranges of experiences contributed to their selection for the formation of the band when in 2016 a French promoter asked pianist and musical director Renee Rosnes to create a group for concerts in Paris and Luxembourg. The seven members, native to varying countries, enjoyed the results of the concerts so much that they set up a 2017 European tour. And so the musicians of Artemis already had developed their own repertoire and their level of comfort before their landmark performance in Newport, Rhode Island.

Now, the album Artemis has been released with the musical authority of a well-established band. Which it is.

Drummer Allison Miller’s “Goddess of the Hunt” opens Artemis, appropriately enough, with Rosnes’ pedal point, initially agitated solely by Miller’s rolls and light snare work. Then trumpeter Ingrid Jensen enters with her own haunting relaxed mid-register lines. In the second chorus, tenor saxophonist Melissa Aldana’s joins Jensen with close harmony as bassist Noriko Ueda takes up the pulsation started by Rosnes. Clarinetist Anat Cohen counters the Jensen/Aldana motive with the scampering, twisting polyphonic texture of a quicker tempo before the separate threads finally form a fabric that introduces individually the instrumental solos. Those solos immediately set up a wow factor and reveal that these musicians are of the highest levels of jazz musicianship as their improvisations command attention, and as the instrumental sextet concludes with the complementing fullness of an orchestral sound.

In addition, the album’s high level of production values immediately become apparent with the equalizing balance of sound for all the instruments, the sound engineer amplifying Rosnes’ glistening work on the piano to match the volume and clarity of the horns for a recorded blend that a band of this caliber deserves.

The compositional skills of Artemis’ musicians indicate even further the depths of their talents. Artemis includes original pieces written by five of its members, and a sixth member arranges a standard.

For entertainment value, brought to life by the intertwining of difficult and delicate melodic filaments, Rosnes’ “Big Top” creates through music a visualization of the circus experience. This crowd-pleaser (an approrimate term when crowds are permitted again) commences with Rosnes’ allegro single-note reference to the “Entry of the Gladiators,” a piece long associated with circus bands, before introducing, complete with a whistle, her wacky melody akin to the Carl Stalling Looney Tunes pieces that enhanced Warner Brothers’ cartoon antics. The rest of the group takes up the theme, and it becomes clear that “Big Top” simulates in music an entire circus performance with its signature sounds. Miller makes it evident with a drum roll as if a matter of grave Greatest Show on Earth importance, such as a lion jumping through a hoop or a trapeze leap or the sitting up of an elephant procession, were to occur. Cohen’s clarinet suggests the comedic appeal of clowns and adds to the fun in this clever and challenging arrangement of varying big-top scenes.

Aldana contributes “Frida,” inspired by Mexican painter Frida Kahlo, and a part of a six-part suite that wasn’t included in her Visions album. Less propulsive than “Goddess of the Hunt” and “Big Top,” “Frida” maximizes the effects that the group’s vibrant colors (a fortunate discovery when the sextet played together for the first time) can achieve as Cohen changes to the bass clarinet for harmony. Aldana is in the lead throughout much of the track as her rich tenor sax work over the entire range of the instrument presents the melody with engaging power. Cohen’s “Nocturno,” with intimations of tango from Ueda’s bass, remains in the middle registers of all the horns as they suggest shadowy contemplation at a slow pace, brightened though as always by Rosnes’ glistening upper-register coruscation. Ueda’s contribution to Artemis, “Step Forward,” in a up-tempo six-eight meter, sways mightily with infectious harmonic interplay, the rhythm section surging with insistent prodding to allow for the ignition of individual fiery solos, including the bassist/composer’s. And then, the entire celebratory feel of “Step Forward” ends when Rosnes plays the slowdown of a pattern similar to the one that started the piece.

As for arrangements of covers, Jensen’s melancholy re-harmonization and stretching-out of “The Fool on the Hill’s” melody return to the song’s well-known phrases as its basis. Artemis makes the arrangement its own with brief free improvisations, invigorated by current events through passionate references to the title’s sarcastic pun. More importantly, Jensen’s voicings create a platform for the instruments’ nonetheless elegantly shifting blends, as if the band can’t help itself from creating prismatic orchestral hues. And Rosnes’ re-imagining of “The Sidewinder” veers away from the tempo and trumpeted might of Lee Morgan’s famous groove with a modification of “Song for My Father’s” vamp; a darker, moodier slow feel; and the trading of fours and then twos in the middle registers (with Cohen on bass clarinet). Rosnes’ piano glistens as always, and Aldana dares to break from the familiar melody into the altissimo range, Jensen’s trumpet remaining muted with its volume compellingly and consistently mezzo piano.

Vocalist Cécile McLorin Salvant, now residing in France, joined the group for tours and for this recording, on which she sings two songs. Rosnes chose to include Stevie Wonder’s “If It’s Magic,” which Salvant sang as a duo with Rosnes during the fateful Newport Jazz Festival concert. Rosnes expanded upon the magic of that event by arranging for all of Artemis to play, the horn’s harmonies without bass and drums following, as would a piano accompanist, Salvant’s trained and distinctive voice, known now to legions of jazz enthusiasts. Reviving as she has on her own albums yet another little-known song from the swing era, Salvant chose to include Italian songwriter Rocco Accetta’s “Cry, Buttercup, Cry,” originally sung by Maxine Sullivan, who was an inspiration to singers like Peggy Lee of the next generation. Rosnes’ arrangement of Swing Era harmonies remains coolly downhearted in accordance with its loss-of-love theme as Salvant sings with un-embellished projection of the lesson-learned lyrics.

As Was continues to strengthen Blue Note’s roster of leading jazz artists, Artemis’ premier album fits into his plan. And no doubt the members of Artemis are gratified to be recording it on the iconic Blue Note label.

All of the members of Artemis are female.

Except when the band members themselves call attention to that fact.

By explaining the gender-based origins of a composition. As Rosnes does by saying that “Big Top” is a metaphor for the novelty of female jazz musicians, a novelty that Artemis is helping to discard.

Or by the name of the group itself, which is an allusion to the Greek goddess of the hunt, signifying, according to Miller, the mysterious quality and fierceness of women.

All of which combines to make Artemis an album that may be valued in the future as one that’s as memorable—because the members of Artemis call attention to their band as one consisting solely of female musicians—as Max Roach/Abbey Lincoln’s We Insist! Nina Simone in Concert or Mary Lou Williams’ Zodiac Suite.