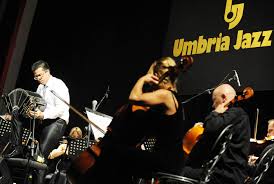 Commemorating the 30th anniversary of the Berklee-Umbria Jazz Clinics at the Umbria Jazz Festival (July 10-19) in Perugia, Italy, Berklee College of Music surprised the festival’s founder Carlo Pagnotta with the George Wein Impresario Award at a concert held on the eve of the festival. The George Wein Impresario Award – named for the founder of the Newport Jazz Festival – recognizes individuals who bring music to life through their dedication to discovering, mentoring, presenting, and promoting creative musicians and their music.

“Pagnotta has brought outstanding jazz festivals to venues all over the world, from Australia to Brazil, Japan to Argentina, and so many more points in between,” said Berklee’s president Roger Brown. “It’s easy to see why he has become synonymous with the pinnacle of live jazz on a global scale. Pagnotta’s contributions also extend to music education. The Berklee at Umbria Jazz Clinics have been a vital source in the growth and development of new generations of jazz musicians for 30 years now.”

“Who could have imagined that 30 years later, we’d still be doing this together? It’s unbelievable,” said Pagnotta in his acceptance remarks. “Year by year, the festival gets better and better. After so many years, I never expected this.”

Berklee also presented honorary doctor of music degrees to Paolo Fresu, multi-award winning Italian trumpeter and flugelhorn jazz player, composer, scorer, arranger, artistic director and professor; and Charles Lloyd, American saxophonist renowned for his improvisational talents and interest in the cross-pollination of jazz with rock and non-Western styles of music, and his contribution to the development of fusion and world music. Berklee’s honorary doctorate recipients are recognized for their achievements in contemporary music, for their enduring contributions to popular culture, and for the influence their careers and music have on Berklee’s international student body.