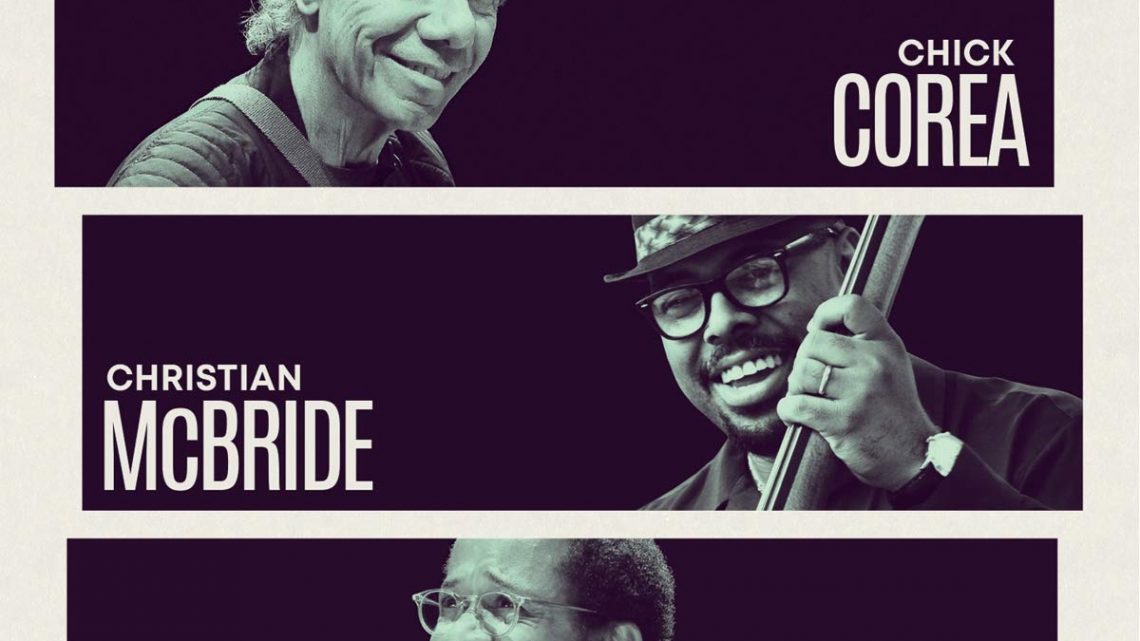 Fortunately for his listeners, Chick Corea’s prodigious musical output pours not from a container that’s emptied and then refilled, but from a stream that ceaselessly flows. One can imagine his never being far away from his piano or keyboard at home. Corea seems so connected to music that no doubt it has become an essential element of his daily life.

Corea’s playing remains as light as a feather, and his sense of wonder at the beauty that music allows remains his ultimate adventure, not in spurts of interest, but continuously so. The fact that Corea, at the age of 78, never lost his sense of wonder or the ability to have fun has assisted this vigilant knight in his never-ending quest at the piano for jazz adventures, eternal verities and enlightenment. And so, when Corea plays with other jazz masters, each concert or recording is a unique experience, similar to other performances of the same songs due to their touchstones of melody, but always fascinatingly different in their enchanting nuances.

Corea’s abundance of music from live virtuoso concerts provided the materials for his 2014 triple album package of Trilogy. Trilogy was deservedly celebrated as another cherished Corea achievement and then was awarded with GRAMMY awards. But the same trio’s improvisational imagination, like-minded to-and-fro development of musical ideas and instantaneous audience rapport continued during additional concert tours, none of which were commercially released as albums.

The best of those performances can be heard again by those who attended the concerts—and more importantly, by a worldwide audience of those who didn’t. Trilogy returns, not as a three-CD package. (One CD wouldn’t have been sufficient to suggest the breadth of musical styles played in auditoriums in far-flung cities throughout the world.) This time, two CD’s, with hardly enough capacity to capture the prodigious output that Corea’s trio performed, signify through Corea’s careful selection the wide variety of compositions performed, all of which represent personal significance to him. The Trilogy name remains, though, as an extension of the first album with the same trio that includes Corea, bassist Christian McBride and drummer Brian Blade.

Now we have Trilogy 2, a follow-up documentation of another of the trio’s world tours.

As Trilogy 2 is heard, it becomes evident that Corea’s youthful joy, shared by McBride and Blade, account for not only their fascinating ability to vary and make special the performance of songs they’ve played many times before, but also their in-the-moment unity of thought that engages the audiences with musical wit and wisdom.

No doubt intentionally, Trilogy 2 includes tracks that represent styles from Corea’s first recordings to his most recent one and thus covers his entire recorded career as a leader. “Now He Sings, Now He Sobs”—from Corea’s first trio album and only his second album after recording Tones for Joan’s Bones that included Woody Shaw and Joe Farrell—extends the opening drum solo with Blade’s martial suggestions that may have thrown off an audience without a program about which piece would follow. But then as Corea’s famous introduction overlays Blade’s cadence, the composition to be heard is clear. The trio breaks out into a jazz waltz enlivened by Corea’s trademark rippling scamper on only the second recording by Corea of this famous tune since then. Corea’s influential technique combining ideas from his Spanish heritage, an encyclopedic knowledge of jazz harmonies, free fusion expression and a light touch of treble-clef dance-like motion has remained identifiable throughout the 51 intervening years. Accordingly, Trilogy 2 includes “La Fiesta,” another of Corea’s signature pieces from Return to Forever, but representative of the Spanish/Latin influence on some of Corea’s albums, most recently on this year’s release of Antidote. As Corea effortlessly surges through “La Fiesta” with prestissimo sweep, excitement builds…and builds…as the mutual support among the trio’s members makes this version one to remember. In particular, Blade’s individualistic style of support is a reminder of the percussiveness, felt even during the piano’s rests, inherent in Corea’s works. McBride’s pulsation, a third of a single voice, captures the piece’s changes of moods, from flamenco-like dance to swing to brief mid-section delicacy. In addition, the selection for Trilogy 2  of “La Fiesta”—which was included on Stan Getz’s album of Corea’s compositions (except for “Lush Life”), Captain Marvel, at a time when Getz was searching for a contemporary style—recalls Corea’s early-career recordings with jazz masters of the previous generation.

Some of the other tracks on Trilogy 2 include similar tributes.

The remembrance of Corea’s recordings with Miles Davis is represented not by a track from a fusion album like Bitches Brew, but from an album more popularly associated with Davis on which Bill Evans instead recorded. Corea, though, makes “All Blues” from Kind of Blue his own as the Trilogy 2 trio plays it at a faster tempo, inducing Corea-like sway and crispness. McBride’s melodic solo allows him to break loose from a supporting role as he creates musical conversation in the upper range to which Corea drolly replies. Blade contributes to the frolic with his confident, underplayed rhythm, made individualistic by the tuning of his resounding Canopus floor tom, especially when Corea glides into an opposing meter of four against three. Another tribute to an icon with whom Corea recorded consists of the trio’s exploration of Joe Henderson’s well-known “Serenity,” Henderson having been remembered on Trilogy with the trio’s version of “Recorda Me.” Interpreting at a medium tempo, Corea sustains much of the playing with block chords gliding through the melody. Along the way, Corea tosses off delights as he decorates McBride’s and Blade’s solos with loose spur-of-the-moment ornaments for harmonic continuity.

Like many other jazz piano players, Corea finds Thelonious Monk’s compositions eternally fascinating in the way that they break all the rules in their spirit of fun. And so Corea includes two Monk pieces on Trilogy 2: the often-heard and adjacently track-sequenced “Crepuscule with Nellie” and the seldom-heard “Work,” through which Corea’s trio romped on the first Trilogy album. “Crepuscule with Nellie” starts with Corea’s self-correction of the title (it’s “Crepuscule with Nellie,” not “Crepuscule for Nellie). With respectful adaptability to recognize the source of the composition, Corea initially plays the famous piece with thick bluesy chords before he adds his own voice of upper-register stops and starts that allows for playfulness among the trio’s members: McBride’s pronounced descents and Blade’s rolls built from the spirit of the piece. Like a jigsaw puzzle, “Crepuscule with Nellie” consists of separate segments that connect when the players bring together the pieces to create a composite that makes sense of it all, as does Corea’s Trilogy trio—masterfully, at that. Corea appears to enjoy the “Work” challenge of its oblique chord structure in a straight-ahead meter of four that allows for gamboling and the tossing of the lead voice back and forth among the three of them.

Corea’s selection of the other performances that round out Trilogy 2 consists of more of his compositions like “500 Miles High” from Light As A Feather, as well as his beautiful re-crafting of standards. In addition to “But Beautiful” (yes, absolutely, it is) and “How Deep Is the Ocean?” repeated from the first Trilogy album for a compare-and-contrast opportunity, Corea recognizes Stevie Wonder’s “Pastime Paradise” as a contemporary standard at the singer’s suggestion. Evolving from an introductory puckish “Salt Peanuts”-like use of octaves, which sets up a jittery pedal-point like basis, the song receives the joyous interpretations of Corea’s trio. Now McBride sings with his vibrant arco solo, now Blade revels with his infectious patterns built in response to Corea’s left- and right-hand conversations with himself, now Corea sparkles with his characteristic spare chords of adjacent notes. “Pastime Paradise” ends with an arranged diminuendo waterfall of harmonic descent by McBride and Corea.

Consistent with “trilogy’s” definition of three closely related musical works, it’s appropriate that there must be a Trilogy 3 for titular completion and for enthusiasts’ demand. Let’s hope that Corea’s inevitable flow is packaged to complete the series of threes.

Next post Richie Goods - My Left Hand Man: A Tribute to Mulgrew Miller