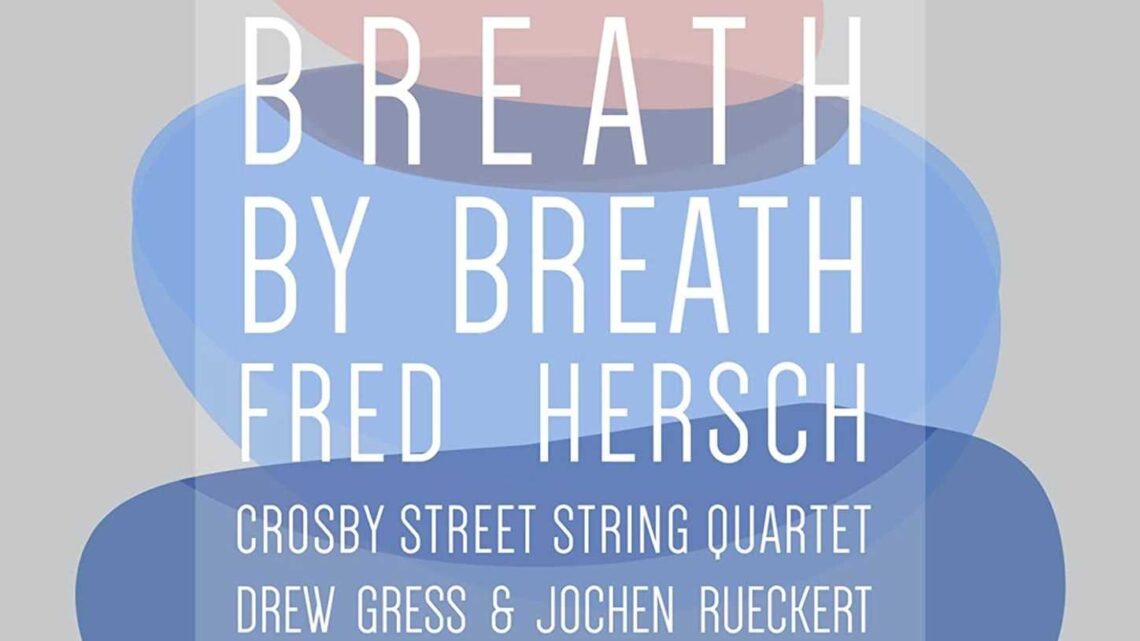 That’s not a reference to meditative droning.

Rather, meditation prompted by music allows a clearing of the mind. To block out one’s surroundings. To let music wash over a person and enter a state of spiritual recharge. To restore positivity. Why else has the sale of personal listening devices exploded and their technology advanced, first from headsets to the early Walkman’s and on to iPods and cell phone playlists and then earbuds?

Fred Hersch, one of the most adventurous, ceaselessly creative and innovative contemporary jazz artists, not only realizes the importance of meditation. He has recorded an album, Breath by Breath, to reinforce its importance.

Significantly, Breath by Breath includes yet another one of his masterworks, The Sati Suite, which musically describes various elements of meditation.

Perhaps Hersch’s deep immersion into meditation, even as he performs, accounts for his uncompromising appeal as he explores numerous art forms, as well as accounting for his lifelong regeneration to investigate new artistic interests. The opportunity for meditation—to think while clearing the mind, to examine new avenues of curiosity and then for execution—may account for the lifelong growth of other jazz musicians like Miles Davis or Chick Corea, who continued to advance new musical forms throughout their lives. Hersch doesn’t release a stream of repetitive albums. Rather, his reflection—in other words, his intelligence—establishes new, distinctive purposes for them.

Besides appearing on other musicians’ recordings, Hersch’s important and memorable recordings are too extensive to list. Just a few of them include: My Coma Dreams, which describes his hallucinations while hospitalized; Leaves of Grass, a tribute to poet Walt Whitman; The French Collection and Red Square Blue, on which he collaborates with iconic jazz artists to combine classical and jazz sensibilities; Last Night When We Were Young and The Duo Album, proceeds from which benefit Classical Action of Broadway Cares/ Equity Fights AIDS; duo albums with singers for fresh perspectives upon songs; and Variations on a Folksong, premiered in mid-January 2022 at Carnegie Hall by concert pianist Igor Levit.

Again, Hersch has recorded another category-defying—that is, personal—album, this one stemming from his childhood experiences. When Hersch went to piano lessons in Cincinnati, his teacher’s husband, a cellist, practiced with the LaSalle [String] Quartet. So, Hersch’s lessons extended beyond personal instruction to self-initiated absorption of melody and harmony as he, without prompting, analyzed the quartet’s music. Now, Hersch has composed and arranged an album consisting of his trio’s melding with the Crosby Street String Quartet.

After recording his last solo album, Live from Home, without the stimulus from other musicians because of the COVID pandemic, Hersch decided that future recordings will involve his involvement with groups, so much so that the musicians of Breath by Breath kicked off the album’s introduction with a live performance at The Village Vanguard.

The results of Breath by Breath are uplifting, beautiful and peaceful in a way that encourages mindful relaxation, even as they remain invigorating.

That is, Hersch’s compositions about meditation aren’t soporific, atmospheric music that washes over the listener. Just the opposite. They reinforce his meditative practice of mindful awareness—observations, tranquility, selflessness, acceptance of things that he can’t control.

Not only that. They are informative. They describe various aspects of the Sati reference to meditation from the Pāli language of the Indian subcontinent associated with Buddhist teachings.

And so, Breath by Breath is distinguished by another of Hersch’s masterpieces: The Sati Suite.

How does Hersch musically describe meditation, instead of inducing it? Or, how does he encourage meditation by giving examples of its tenets?

Hersch’s introspection provides for eight elements that combine to create the Suite. He performs his own work in a live session while the quartet wraps around him like a blanket and/or interacts with him and the other members of his trio.

That trio consists of drummer Jochen Rueckert and bassist Drew Gress, who was a member of Hersch’s third trio with Tom Rainey. The first-call members of the string quartet—who have performed on numerous movie and television soundtracks like Spike Lee’s or on recordings as part of various notable string ensembles—are Joyce Hammann and Laura Seaton on violin, Lois Martin on viola and Jody Redhage Ferber on cello.

Hersch’s upper-register ringing, his “tintinnabulation” as Edgar Allan Poe would describe it, begins the first track, “Begin Again,” which intends to let the listener know about the renewal of the spirit that refreshes with each session of meditation. Gress and Rueckert provide the buoyancy of the piece, as the quartet’s splashes of color embellish Hersch’s intertwined bass- and treble-clef counterpoint. And immediately, the style is recognizable as Hersch’s. He seems always to have the same resonant tone from the piano, even without his seven-foot 1896 Steinway B piano from his earliest recordings. It seems that a jazz pianist closest to Hersch’s style who allows for the tenuto ringing of notes for their full value is Marc Copland, rather than the harder attack of Bill Evans, to whom Hersch is often compared.

After Hersch has “begun again,” he describes through the title of his next piece and through his compositional skills the “Awakened Heart,” as the spiritual awareness takes the form of, first, the quartet’s easing into the piece with a calm introduction of the melody, rising from the lines of the cello, and then the viola, and then the violins until the moving harmony completes. That leads to Hersch’s solo, stating all four parts on the piano in keyboarded ensemble fashion as the awakening occurs through growing dynamics. The quartet takes over at the end with four bars of a fading diminuendo.

That leads to the full meditative state, “Breath by Breath,” surrendering to the flow of life while observant of its energies, suggested by the quarter-note bass’s pizzicato movement under the melody. When Hersch comes in after the quartet’s initial statement followed by Gress’s solo, the pealing tonal sustains of his piano are reminiscent of previous works by Hersch in their explorative gorgeousness as shifting chords evolve into luxuriant work at the upper extremity of the keyboard before resolving into the middle register. Also notable is Rueckert’s understated percussiveness, adding sly textures and hues in the middle part of the track.

To describe the pushback from the active mind while struggling to meditate, “Monkey Mind,” more than involving an almost visual contrast of such actions, also explains why Hersch values interactivity when he performs and why he says that, from now on, “it’s live or nothing.” Very brief, uninterrupted bursts of improvisation by various members of the trio and quartet constitute a conversation—a piano’s provocation here, a violin’s plucking there, the drum’s tapping in response, the bass’s continuation of a descending line started by the violin—so much so that they imitate human voices. Their sonic dabs simulate human conflicting states of human thought, recalling the pointillistic to-and-fro of “Whisper Not” on his Hersch’s Open Book album.

Gress’s bass lines depict the “Rising, Falling” of the human heart during meditation during this waltz, reflecting back to the meditator’s “Awakened Heart,” and reinforcing that the heart as well as the mind initiates the process. But just as important as this depiction is the reminder that Hersch, despite his versatility, has always valued songs as melodies have flowed naturally throughout his performances throughout his career. “Rising, Falling” suggests that meditation has always been within Hersch’s music as this song reflects his performance of “Lotus Blossom” on the 1996 Passion Flower album, which Hersch recorded too with Gress, as well as with a string orchestra that included Seaton, Hamman and Martin.

On “Mara,” Rogerio Boccato’s percussive pattern of a pedal point throughout the piece suggests the Oriental origins of Sati meditation. Ferber’s legato double-stop work on the cello introduces the minor-key theme of four-measure repetitions, which Hersch takes up as his treble-clef work leads to uncharacteristic middle- and (very) low-register lines reflecting the weightiness of the subject. That subject refers to the demon Mara, who, in Buddhist tradition, tempted Siddhartha by entering his mind. Nonetheless, Mara was unsuccessful as Siddhartha’s meditation continued when unrealized thoughts remained at bay, though Mara’s allure of materialism and power tried to bring them to the surface.

“Know That You Are” features the quartet in an emotive, gorgeous, brief performance emphasizing the significance during meditation of observation and awareness.

And the The Sati Suite ends with “Worldly Winds,” a rousing composition in six-eight animated by Rueckert with controlled force more conspicuously than on the other tracks.

After the conclusion of The Sati Suite, the trio and the quartet perform Robert Schumann’s “Pastorale,” during which the string quartet’s pizzicato interpretations leads into Hersch’s as well. Hersch combines several of his previous styles—the jazz/classical fabric of The French Collection, the vibrancy of piano/string collaboration in Passion Flower, his deconstruction of well-known pieces of Open Book—into a single suite of magnificence and thematic importance, That theme consists of peace of mind in the midst of the distractions and darkness of the past few years. Notable, however, is how Hersch, at 3:12, changes the texture of “Pastorale” when he gradually glides from plinking staccato attacks to a lush legato expressiveness. When the quartet comes in to join Hersch’s trio, their build-up leads to a majestic culmination before a repetition of Schumann’s theme.

Without a doubt, Fred Hersch’s album, Breath by Breath, is another one of his major accomplishments. 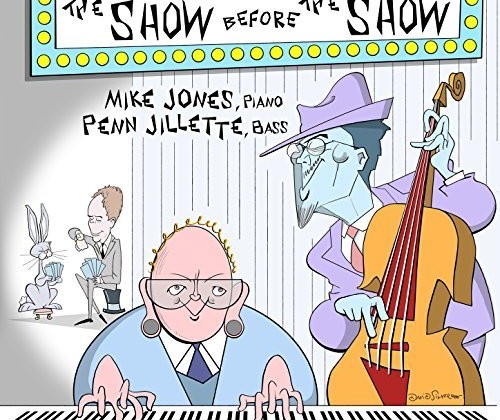 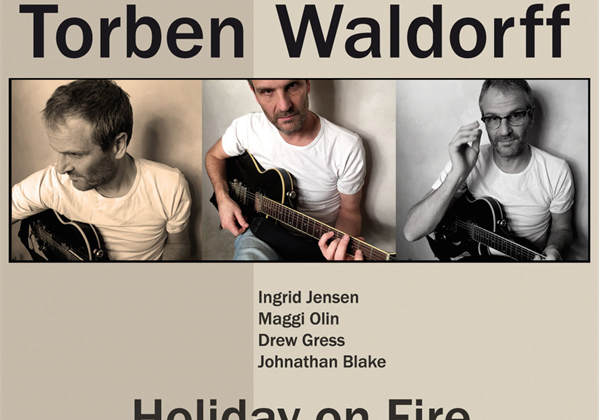