CD Release: Renė Marie, I Wanna Be Evil (With Love to Eartha Kitt) 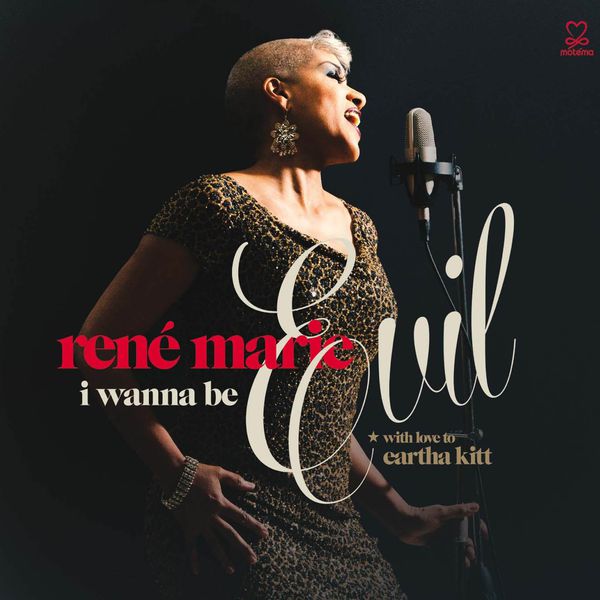 Due to the wisdom and appreciation gained from hindsight, Eartha Kitt receives appropriate tribute from equally outspoken and equally talented and equally “wicked” Renė Marie, who perhaps perceives Kitt as a kindred spirit.

If we’re honest with ourselves, we have to admit that, at least narratively, wicked characters are usually more interesting than their adversaries—that scene-stealer Darth Vader more complex and memorable that Obi-Wan Kenobi, Wylie Coyote more comical than The Roadrunner, HAL the Computer droller than the 2001 astronauts sharing the spaceship with it, the evil Walter White more unpredictable and magnetically fascinating than the good Walter White. The same perverse delight in malice is true of the Wicked Witch of the West, who is far more gleeful and unforgettable than boring Glinda the Good Witch of the North—so much so that a play sympathized with the Wicked Witch of the West.

Sorry to say, protagonists are usually bland. The public’s fascination with wickedness eventually would have led to the rediscovery of Eartha Kitt’s persona and recordings, which projected not so much wickedness as the fun derived from being unconventional…and from being honest. Renė Marie appreciates such honesty deliciously delivered. You can tell. Marie starts her spirited and imaginative Eartha Kitt tribute with a cackling soliloquy on “I’d Rather Be Burned as a Witch,” a song that’s unblushingly truthful, a song that’s funny, a female-enpowerment song that was ahead of its time, and a song that Kitt owned. Now, it richly deserves reappraisal for its unapologetic sensuousness and unconventional cleverness that may have shocked the 1959 Ozzie-and-Harriet society when Kitt sang, “You want a gal who will be your pal / Who would never look at another / Who would be good and true / And take care of you / Sorry, you want another. / Yes, they say that I’m a witch / And that I weave a spell / Well, I’ll be a son of a … whoo! What the hell!  / I’d rather be burned as a witch / Than never be burned at all.”

Today, Kitt’s coquettish suggestiveness may seem out of date instead of prescient in a culture of uninhibited frankness. Nonetheless, Kitt received overdue popular acclaim in the 1980’s with her late-career hit of “Where Is My Man?” which proved her unending instinct for popular culture. Renė Marie’s version of “I’d Rather Be Burned as a Witch” takes growling and purring and cooing delight in the song’s outspokenness…and honesty. The force and irresistibility of Marie’s delivery—not to mention its summary of all of the devilishness to follow on the album—earn “I’d Rather Be Burned as a Witch” the honor of opening her from-the-heart tribute to Kitt.

The total engagement of the musicians in the project becomes evident from the start, as but three horns and a rhythm section suggest an entire band backing Marie due to trumpeter Etienne Charles’s effective arrangement. While being introduced on the album with their own solos on “I’d Rather Be Burned as a Witch,” the musicians take the other tracks in unique directions as they become even more inventive on the songs that follow. The proof of the truth that the musicians are as immersed in the project as Marie, rather than simply providing arranged back-up, becomes hilariously obvious during the solos on “Oh, John,” another infrequently performed song. Marie’s interpretation makes obvious the reason for its infrequent performance, as its sensuousness borders on salaciousness.  Marie’s skills as a vocalist make the sexiness of “Oh, John” as effective as her light, seamless re-creation in two languages of “C’Est Si Bon,” which features an extended in-the-spirit clarinet solo by Adrian Cunningham. As for trombonist Wycliffe Gordon’s innovative solo on “Oh, John,” he extends Marie’s half-toned, narrow-ranged, slurring story of ill-fated resistance with his own imitation-of-voice, sometimes non-melodic solo of blurts and whinnies and buzzes. Not only does Gordon expand upon the song’s drama, but also he listens to the vocalist’s direction, rather than cleaving the track into a vocalist’s section interrupted mid-track by an instrumental solo. Gordon’s ability to imitate the human voice, with only occasional references to melody, continues when he uses his mute to broaden the tone of single notes with increases of volume and changes of color on “My Heart Belongs to Daddy.”

But this is Marie’s album. And in spirit, Kitt’s too. Marie’s choices of songs from Kitt’s long career, always a difficult decision, mix Kitt’s hits with less popular tongue-in-cheek songs expressing socially frowned-upon behavior. Not much did Kitt or Marie care about that. Truth be told, both of them defied acceptable protocol with people in high places, Kitt on a Presidential level and Marie on a gubernatorial level. So of course, Marie just had to include on I Wanna Be Evil “C’Est Si Bon” and “Santa Baby,” two songs popularly associated with Kitt. “Santa Baby” receives a thorough reworking, as Kevin Bales’s arrangement converts it from a novelty song to a slower, sultrier, flirtatious version that emphasizes the chord changes, so much so that it also serves as a basis for Etienne Charles’s restrained and finely delivered jazz solo. “Come on-a My House” undergoes transformation too as Marie discovers musical possibilities in the song that allow, through heightened percussiveness over which she sings without horns, personal expression.

At the end, Marie includes one of her own well-received songs that is totally in the spirit of the tribute: “Weekend.” A story of allure and mystery and forbidden-fruit behavior, yielding to temptation, “Weekend” continues through 7-1/2 minutes of verses to set up a cliffhanger that, appropriately enough, leaves the listener wanting more. As in all the songs on the album, the woman of “Weekend” “wanted to be ‘evil’.” And the album ends with the listener wanting to hear even more of Eartha Kitt’s tunes, sung soulfully and wickedly by Renė Marie.

Next post Steve Wilson Featured on NY-1 TV, as he Records Live Album at The Village Vanguard with Wilsonian’s Grain