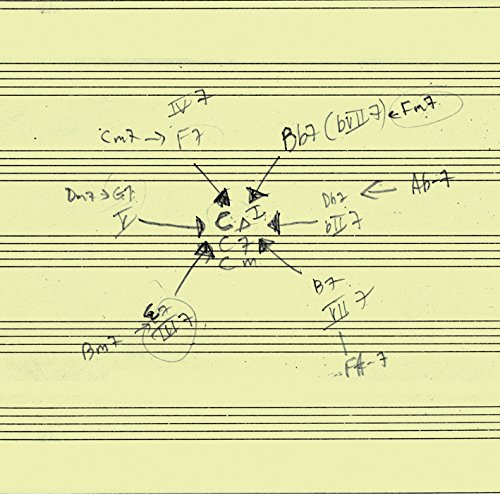 Marking the band’s album debut, Actual Trio is a perfect demonstration of the group’s undeniable chemistry, spare and lean playing, and fabulous telepathic improvising evident from the first notes of ERIA that opens the disc. Displaying an extraordinary technical command, Schott uses the guitar vernacular organically as a unifying element. The relaxed integrity and graceful strength that Schott, Seamans, and Hanes bring to Actual Trio recalls classic guitar trio records such as Pat Metheny’s Bright Size Life, and John Abercrombie’s Gateway. Other passages may bring to mind the blues liquidity of Jimi Hendrix, or James “Blood” Ulmer’ʹs spiky dissonances.

Unlike the genre-­busting compositions and extravagant orchestrations of Schott’ʹs previous records, this album’s approach is pure and simple. Actual Trio was recorded live in the studio, one session, without effects or overdubbing, and with minimal editing. This without-­a-­net approach, says Schott, “exposes a musician, which can be humbling, but results in something uniquely honest and direct. We’ve played so much together, we just needed to get in there and press ‘go’.”

Formed in 2011 to play a monthly gig at the Actual Café in Oakland, California, this deeply bonded trio exercises virtuoso listening, and brings Schott’s compositions to vivid life. “I feel very fortunate to have John and Dan as partners,” says Schott. “Together, we are committed to the joys of swinging, playing what you hear, being in the moment, and sharing with audiences.”

About Actual Trio
John Schott graduated from Seattle’ʹs Cornish College of the Arts, where he studied with Gary Peacock and Julian Priester. In 1992, he and Ben Goldberg formed Junk Genius, which released records on Knitting Factory and Songlines, as well as in other combinations on Tzadik, Nuscope, and Victo. Schott was also, with Charlie Hunter, Will Bernard, and Scott Amendola, a member of the jazz/funk band T.J. Kirk, whose second album If Four Was One (Warner Bros.) received a 1997 Grammy nomination. Schott’ʹs CD Shuffle Play: Elegies for the Recording Angel (New World Recordings) featuring his 16-­piece Ensemble Diglossia in a 70-­‐‑minute composition, was named one of the best records of 2002 by The Wire magazine. Schott can also be heard on records by John Zorn, Tom Waits, The Baguette Quartette, and Steven Bernstein.

Dan Seamans has been playing bass in jazz and improvised music settings in the Bay Area since the 1980’s. He was a co-­‐‑founder of the New Klezmer Trio, credited with pioneering the Radical Jewish Culture movement. They released three CDs, all of which are available on Tzadik. Dan had formative associations with Donald Bailey, Bill Bell, Attila Zoller and Mark Levine, and has recorded 6 albums over 20 years with the Lost Trio, including 2014’s Monkwork.

John Hanes has been an in-­demand drummer in the Bay Area since 1977, backing up classic R&B singers Etta James, Lowell Fulson, Otis Clay, Freddie Roulette, and Fillmore Slim. He can be heard on over a hundred CDs, including those of Henry Kaiser, Victor Krummenacher, Mark Karan, Orchestra Nostalgico, Chrome, and Pearl Harbor and the Explosions, as well as on Richard Thompsonʼs soundtrack for the Werner Herzog film Grizzly Man.