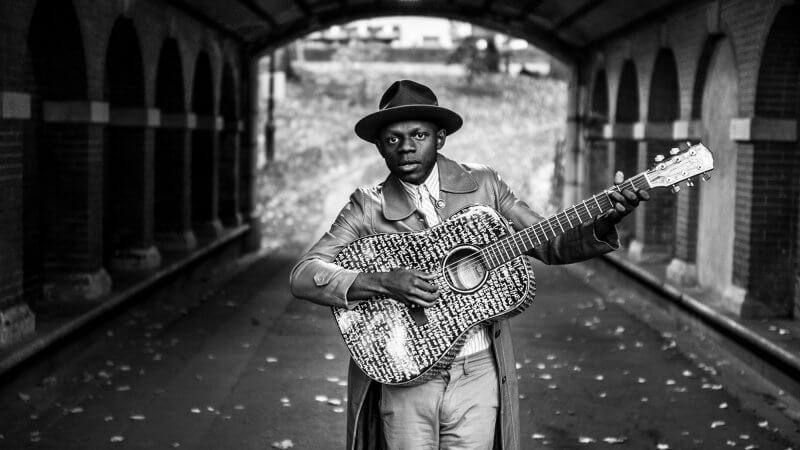 18 JUNE 2020 (TORONTO, ON) —Grammy-nominated singer-songwriter Ondara has been working to create “The deuxième Project”—a visual companion to his newly released album Folk N’ Roll Vol 1: Tales of Isolation via Verve Forecast/Universal Music Canada, the country’s leading music company. The series of videos, one to accompany each song on the album, was commissioned from creators around the world working in isolation or under lockdown, with the goal of originating videos as raw as the music itself and to highlight our shared experiences during the pandemic. A new video will be released every Thursday, beginning today.

“Pyramid Justice” is the first video in the series. It was shot in Los Angeles by director Shane McCauley.

Of “The deuxième Project” Ondara explains, “It is merely June and the year has been one of the most tumultuous in recent history. Certainly, the most tumultuous of my lifetime. Now more than ever as we employ vigilance in the pursuit of enduring change, we must stay grounded in virtues of love and kindness, lest we may once again fall into the trappings of old ways. It is in this spirit of harmony that I conceived ‘the deuxième project’; a collaborative project featuring creators from 12 cities across 6 continents. From all the corners of the world, these talented creators came together to make compelling videos for the songs on the new record I made in isolation. I have been moved and inspired by their incredible talents, their willingness to jump on the project on such short notice, their hard work, and their commitment. To me they represent the capacity of all humanity regardless of race, age, gender or background, to remain united, and to work together, even in the face of extenuating difficulties. A reminder we all need now as we navigate compounding uncertainties. A reminder that we are all made of the same star stuff, and any of us would bleed if cut, starve if not fed, die if asphyxiated, and fall ill if exposed to a deadly virus. In keeping with this sentiment, ‘the deuxieme project’ is in essence a communion of the human spirit across oceans, and across cultures. A reflection on our shared experiences amid the ongoing days of insanity.”

Folk N’ Roll Vol 1: Tales of Isolation was composed and produced by Ondara while in lockdown in Minneapolis over the course of a week. Released last month to critical acclaim, NPR Music hails, “This music made me feel awful but in a really cathartic, incredibly powerful way that was ultimately healing. Put this one in a time capsule. This record, it is the pandemic,” while Brooklyn Vegan adds, “The whole thing may have come together quickly, but it feels just about as fleshed-out as its predecessor and Ondara’s soaring voice and storytelling ability is still just as compelling.”

Folk N’ Roll Vol 1: Tales of Isolation follows Ondara’s 2019 debut Tales of America which received widespread praise. Ondara was featured on NPR’s “All Things Considered,” performed a Tiny Desk concert, and made his television debut on CBS This Morning: Saturday. Moreover, the breakout LP received a nomination for Best Americana Album at the 62nd Grammy Awards and Ondara received a nod for Best Emerging Act at the 2019 Americana Awards.

Ondara grew up in Nairobi, Kenya listening to American alt-rock and making up his own songs for as long as he can remember. At an early age he fell in love with the music of Bob Dylan and moved to Minneapolis in 2013 to pursue a career as a singer and songwriter. He began making his way in the local music scene, continually writing songs about what he saw, felt and experienced in a place far different from home. Since then, he has toured extensively including sold out European performances, a completely sold out headlining U.S. tour, appearances at festivals nationwide including Xponential Festival, Newport Folk Festival and Edmonton Folk Festival, and opened for the likes of The Lumineers, First Aid Kit, Neil Young, The Head & The Heart, and more.

Verve Forecast is home to visionary artists with genre-defying, raw talent, such as Tank and the Bangas, Ondara, Madison Cunningham, S.G. Goodman, Mandy Moore, T Bone Burnett, and more. Originally founded in 1964 as Verve Folkways (and changed to Forecast in 1967), the label was a defining force of the 60s and 70s with artists like Laura Nyro, Richie Havens, Tim Hardin and more. That eclectic legacy continues today, with emerging and established artists of integrity and quality.

Next post The Earth is Your Stage: Daniel Bennett's Outdoor Odyssey