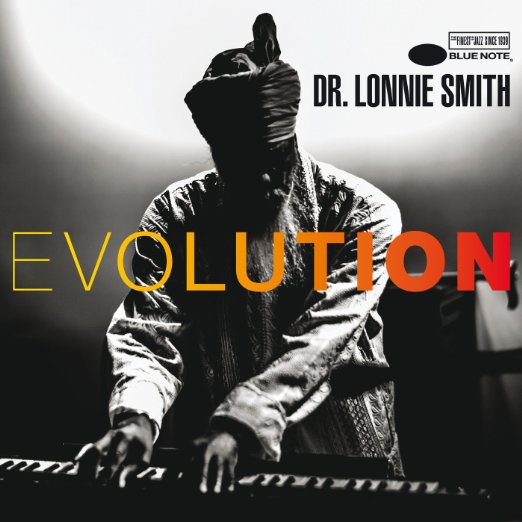 Dr. Lonnie Smith is back. And in a big way. In the musical environment and with the production values that he deserves.

At 73, Smith is one of the few remaining innovators/popularizers of the jazz organ, from the time when Hammond B-3 trios and quartets traveled mostly through the Midwest nightclub circuit. Smith is as powerful and youthful as ever. Rather than imitating B-3 jazz icon Jimmy Smith, Dr. Lonnie Smith always projected his own personality through his music.

Meeting George Benson in Pittsburgh after Benson left Jack McDuff’s group, taking off together for New York, meeting John Hammond there who signed them both to Columbia contracts, and eventually making a name for himself on his and Lou Donaldson’s recordings before dropping out of the national music scene, Dr. Lonnie Smith has always captured the souls of his listeners with the groove of “Alligator Boogaloo” and the allure of “Afrodesia.”

Blue Note president Don Was recognized, if not discovered for himself, Smith’s power to bring a crowd to its feet when he heard him perform at the 2013 Monterey Jazz Festival. As a direct result of that career-changing performance, Smith has released his first Blue Note album in 45 years—and appropriately one that highlights the uniqueness and force of his music.

It appears that a producer’s guidance elicited the excitement that’s always ready to break out at unexpected times when Smith performs. Live audiences benefit from that, as did the patrons of O’Hara’s in Fort Lauderdale where Smith played for eight years in semi-obscurity. Night after night, Smith energized the crowds with the soulfulness that transpired whenever he touched the B-3 there, supported by excellent local jazz musicians like Danny Burger and Eric Allison. (Well, my favorite Dr. Lonnie Smith performance there was the thrilling “See See Rider,” which I wish he would record.)

Instead of the almost trance-like groove of Smith’s most recent albums, Evolution, his new Blue Note album, provides funk instead with the crackling force of not one, but two drummers, Joe Dyson and Johnathan Blake.

The potential for Smith’s group’s power occurs most obviously on the opening track, “Play It Back,” a combination of boogaloo and straight-ahead funk from Smith’s 1970 album, Live at Club Mozambique. Though based on standard blues charges, and without a melody to speak of, “Play It Back” relies on pure groove to get people up and dancing. Its melody and chord structure don’t matter as much as soulfulness, which Smith provides in abundance. With Robert Glasper joining the fun during an extended piano solo, many of Smith’s trademarks occur, like surprise accents, contrasting moods, unexpected rests, high-volume blasts with thrilling intensity, not to mention his overall command of the jazz organ’s possibilities for grabbing the listener’s attention and keeping it. While “Play It Back” provides an effective introduction to Smith’s new group—including trumpeters Maurice Brown and Keyon Harrold, reedman John Ellis, guitarist Jonathan Kreisberg, and drummers Dyson and Blake—“Talk about This,” with its rapping minor-key chant, maintains the irresistible power of “Play It Back.” The musicians are totally engaged in both performances. The highlight of “Talk about This” is Brown’s raspy, punchy, stuttering, blaring, screaming, winding, memorable solo that makes a statement similar to one expected from Russell Gunn. Sure enough, Smith punctuates his low-volume solo with short, briefly loud, pay-attention-to-this accents over the drummers’ understated, complex funk beat.

The full-circle nature of the album continues when someone—Smith? Was? Executive producers Holly Case and Guillaume Metenier?—recruited Joe Lovano to appear on two tracks. Lovano, a 23-year-old saxophonist fresh out of Berklee, made his recording debut on Smith’s Afrodesia album. Lovano, appropriately, appears on “Afrodesia” (but in a funkier, harmonically more oblique version without the reverb and the 1960’s-ish female singer’s whispers of the song title) in Evolution. Their joint performance provides a demonstration of the evolution of their styles and their careers. Instead of tenor sax, though, Lovano gets completely into the spirit of the piece with the G mezzo soprano sax’s funkiness of a higher pitch. Lovano also appears on Smith’s never-before-recorded slow ballad, “For Heaven’s Sake,” colored by the gliding harmonies of Lovano on tenor sax, Ellis on bass clarinet and Brown on trumpet. The solos, and the weight of the melody, belong, however, to Smith and guitarist Kreisberg, who perform with heart-felt restraint—until the dramatic, contrasting super-high-volume ending.

Smith reworks without horns two standards, “Straight No Chaser” and “My Favorite Things.” The standard jazz organ trio of B-3, guitar and drums converts “Straight No Chaser” into a fast-paced re-harmonized blues with altered rhythms. Its arrangement fulfills Smith’s style of overwhelming crescendos, sudden interjecting accents and mischievous improvisational surprises. Smith makes “My Favorite Things” his own as well, with few Broadway or Coltrane references. Instead, Smith’s version proceeds from the slow, barely audible keyboard intro, mystery and portent enveloping the atmosphere, to the fully charged, swaying jazz waltz that slowly fades out with a three-minute B-3 and Korg synthesizer improvisation over a pedal point. Much credit should be extended to Blake, who colors the introduction with soft malleting and percussive effects and then propels the irresistible force of the main section. Indeed, the two-drummer contribution is anything but superfluous, but rather heightens the pulsation and groove and percussiveness that remain inherent characteristics of Smith’s infectious style.

Fortunately, Evolution showcases the kind of music that brings Dr. Lonnie Smith’s audiences to their feet—in spontaneous applause or to dance, as Was witnessed in Monterey. Listeners will continue clapping and dancing as Smith tours and brings his joy to the world.