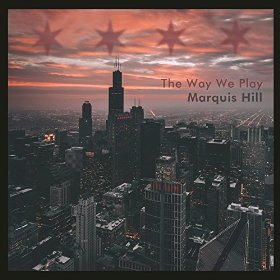 Trumpeter Marquis Hill has been an active presence in Chicago’s jazz venues for over five years, but he came to greater national attention two years ago when he won the Thelonious Monk International Jazz Competition. The fact that Hill had been invigorating Chicago’s jazz scene considerably in various ways without broader recognition suggests that so many other outstanding jazz musicians, also providing unique perspectives and individualistic styles, are performing in local venues with insufficient appreciation. Thank you to the Monk Institute for helping us discover some of them. Hill—now a major voice in jazz, as is, for example, another Monk International Jazz Competition winner, Ambrose Akinmusire—is being more widely recognized for his versatility, warm tone, re-imagining of music from the jazz tradition, personal style and unapologetic loyalty to the city where he learned music.

That loyalty commences the album, with the first track’s, “Welcome’s,” direct reference to the Chicago Bulls theme from the 1990’s, when vocalist Meagan McNeal, as if doing introductions before a live audience, names the band members of The Blacktet: alto saxophonist Christopher McBride, vibraphonist Justin Thomas, bassist Joshua Ramos and drummer Makaya McCraven.

That loyalty continues on the second track of the album. “The Way We Play” is a medley that begins with Harold Green III’s spoken-word description of the group’s style over the group’s vamp (a reversal of the dotted-eighth note, this time instead with the repeating sixteenth note leading to a stretched accent). Green poeticizes during the first minute: “The way we play signifies from which we came.” Then the musicians take over with a performance of Gigi Gryce’s “Minority,” and the excitement begins, not only Hill but also Thomas and McCraven immersing themselves in the piece’s improvisational opportunities to thrill with spirited solos. At the beginning and end of the piece, they blend the “The Way We Play’s” forceful vamp with “Minority’s” melody, with the implicit result of honoring the piece’s representation of the jazz tradition while adapting it to their own experiences.

And there you have it. Marquis Hill pushes with confidence and innovation into future possibilities while remaining true to his hometown’s pulsating style…and while acknowledging the influence of hard-bop on his development. Hill’s wide-ranging talent remains in evidence throughout The Way We Play, as he effortlessly transitions from the authoritative interpretation of “Straight, No Chaser” to a subdued, stretched-out version of “Maiden Voyage,” which allows iridescent colors to shift as Hill’s and McBride’s long tones almost imperceptibly change.

“Maiden Voyage” involves a subtle tribute to Chicago’s influence on the development of jazz as Hill includes on The Way We Play one of Chicago native Herbie Hancock’s famous compositions. Again, though, Hill adapts to the piece to his own considerations as he slows the tempo and breaks the phrasing into sections of unhurried extensions of notes, under which Thomas’s vibraphone shimmers.

While one may consider Hill’s force to have been influenced by a hard-bop trumpeter like Freddie Hubbard or Lee Morgan, instead Hill lets it be known that his influence during early development came from listening to the records of Donald Byrd, an important early mentor of Hancock and who first recorded Hancock on his Blue Note album. Byrd’s versatility—from being one of Art Blakey’s Jazz Messengers to his work with Gigi Gryce and Eric Dolphy to his explorations in fusion and R&B—received due notice from Hill, who similarly is too restless to be limited to one style. And at the age of 29, he shouldn’t be. As Hill continues to boast his Chicago pride while checking out new approaches, the strength of his knowledge of tradition and his remarkable chops combine to allow him to express whatever he chooses.

And so, Byrd’s musical personality infuses Hill’s recording with the group’s original interpretation of Byrd’s “Fly Little Bird Fly” from his 1966 Mustang! Album. Hill plays it at a slower tempo and adds to it the Latin rhythms of percussionist Juan Pastor, not to mention calming it with Hill’s mellifluous tone and Thomas’s streaming vibe chords. The moderate pace of hand-drummed energy contrasting with leisurely tones allows as well for Green spoken explication covering the themes encouragement, self-determination and freedom.

Hill recognizes another under-recognized jazz trumpeter when he includes on The Way We Play Carmell Jones’s “Beep Durple,” which, though Jones hails from Kansas City, features an extended solo by Chicago native and trombonist Vincent Gardner as he negotiates the twisting lines that Jones devised, as does Hill.

Hill’s wide-ranging interests are evident by his inclusion of Horace Silver’s “Moon Rays,” as he stretches eloquently without ostentation or artifice the tune’s long melodic lines over Ramos and McCraven’s contrasting vibrant rhythm. Hill’s appreciation for the beauty of the trumpet’s tone, as well as for its potential for excitement, continues as he performs on flugelhorn as mostly a solo “Polka Dots and Moonbeams,” arresting as a cadenza in its simplicity and individuality.

After “Juan’s Interlude” track of 36 seconds, The Way We Play ends with, not something like an ovation from the stage, but rather with Hill playing “Smile” on muted trumpet over Pastor’s seven-four percussion and Ramos’s bounding bass work before Ramos himself takes a final solo too.

But wait a minute. There is an ovation. And an unexpected one. The best kind. For after 12 seconds of silence, the entire group emerges again from inaudibility through gradually increasing volume to deliver once again its own vamp that earlier concluded “Fly Little Bird Fly.” Hill’s group graciously provides one final fond farewell to its audience and to Donald Byrd.