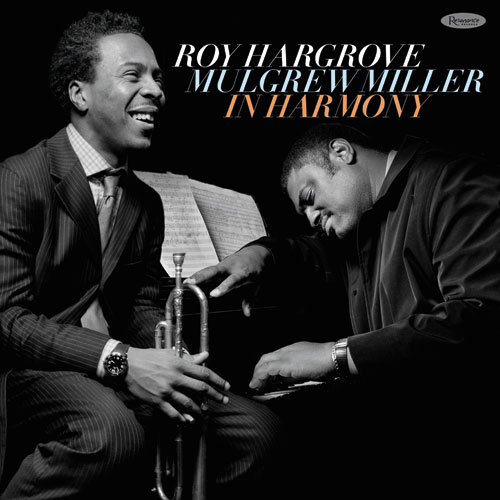 Inspired as they performed before audiences in New York’s Merkin Hall (January 15, 2006) and in Easton, Pennsylvania’s Lafayette College (November 9, 2007), Hargrove and Miller, facilitated by the space and looseness afforded by the duo format, bring to the fore all of the elements that distinguished them as incomparable, direct musical voices.

The jarring element of In Harmony is the fact that both musicians passed away unexpectedly, Hargrove from cardiac arrest resulting from kidney disease at the age of 49 and Miller from a stroke at the age of 57. Similarly with remarkable jazz musicians like Clifford Brown, Booker Little, Scott LaFaro, Jaco Pastorius or Charlie Christian, who remain influential despite passing away too soon, Hargrove’s and Miller’s influences leave us unable to forget how their music affected us and how they will affect future listeners. While Hargrove and Miller left behind numerous recordings that chart the directions that they music took them, unlike those musicians above who died in their twenties, it felt as if both Hargrove and Miller had much more to contribute.

In Harmony provides rich, elegant and inimitable reminders of Hargrove’s and Miller’s abilities to connect directly with the souls of their listeners, their signature techniques being merely means to uplift the spirits of audiences.

While both musicians crossed paths repeatedly throughout their careers, they never went into a studio to record a duo album. In Harmony corrects that gap. The Resonance Records producers discovered that Hargrove’s manager, co-producer Larry Clothier, had recorded both duo concerts heard on In Harmony.

The Resonance Records package—impressively top-quality as they have been for past first releases of discovered material from artists like Eric Dolphy, Freddie Hubbard, Sarah Vaughan, Stan Getz, or Grant Green—includes numerous eloquent and nuanced remembrances from musicians who knew Hargrove and Miller. For instance, who would expect Sonny Rollins to state that he was envious of Hargrove? Who knows why? Or that Ron Carter recalled reprimanding a young Hargrove for being late for a job and not knowing the changes to the music? Or that Miller, in just a few words [“connect the scales”] and through his kind mentorship, influenced Jon Batiste’s style? Or that Christian McBride eventually realized why Miller lived more than 25 years in Easton, Pennsylvania: to raise his family in a small-town atmosphere. In 2006, Easton’s Lafayette College, where Miller was the artist in residence, awarded him with an honorary doctorate in the performing arts.

A duo setting for both Hargrove and Miller seemed to be a natural: Both versatile musicians came from similar backgrounds in the blues, rhythm and blues, and gospel; adapted to and led groups with disparate musical styles; understood the value of soulfulness and direct communication with audiences; and were masters of bringing about excitement and consolation through melody and harmony.

All of that, and more, is contained within In Harmony. The apparent loss of not having a duo recording by these two jazz masters is corrected by Clothier’s foresight in recording these two concerts, which were characterized by continuing spontaneity.

Miller rouses the audience with a free intro of the bridge of “What Is This Thing Called Love?” before laying down the vamp for Hargrove’s bright, burnished melody to come in. On the second chorus, Hargrove improvises, and a controlled burn develops. Notably, Miller, listening, changes the comping from block chords to walking bass lines, to response to Hargrove’s call, and then on to gliding blues chords. Then Miller plays solo with the same energy and fiery intensity as Hargrove, as he accompanies himself. Hargrove, used to performing with drummers on his recordings, is freed instantaneously to alter the character of his interpretations, knowing that Miller will alter his accompaniments on a dime.

The mood changes on the next track, “This Is Always,” as Miller plays a glistening, remarkable introduction over the expanse of the entire keyboard. Easing the audience from the vitality of the first track, Hargrove switches to the flugelhorn, in contrast, to remind us of his ability to bring out the shades and natural appeal of ballads. Bookending Miller’s intro, Hargrove closes the piece in perfect harmony with a rhythmless conclusion of inherent beauty.

It should be noted that Miller, by now reinforcing himself on the recording as the master of introductions, starts Antônio Carlos Jobim’s “Triste” with a clever, rapid variation of Frédéric Chopin’s “The Minute Waltz” before settling into a middle-register bossa nova accompaniment. When he solos, it also becomes apparent that Miller uses space to sustain interest and create tensions to be resolved, instead of filling the performance with multitudes of notes. But multitudes of notes there are at the height of his solo, a culmination to which the calmness rose. Listening to In Harmony, one is reminded that Miller’s style is his own, an amalgam of various historical jazz influences that allow him to draw from his reserves just the right phrase, rhythm or even note for the musical occasion.

While one can imagine the songs of standard jazz repertoire being determined from the wings just before stepping out onto the stage, it seems that forethought led to the intentional inclusion in both concerts of tributes to jazz masters: trumpeters Clifford Brown, Blue Mitchell and Dizzy Gillespie; and pianists Andrew Hill and Thelonious Monk.

Influenced early in his development by Brown, Hargrove plays “I Remember Clifford” with a glowing delicacy exemplified before the bridge by the four cushioned two-note descents of a progression (C-F, C-F#, D-G, Eb-C) and the thoughtful pauses while presenting the tune. Miller as well provides emotional engagement to the tune with a masterful solo of suspenseful rests, treble-clef flourishes and adherence to melody cues throughout his improvisation.

Mitchell’s “Fungii Mama” allows the duo to increase the tempo and provides an opportunity for Hargrove’s and Miller’s versatilities to rouse the audience with a departure from the ballads that comprise much of In Harmony. Purely in the moment, they trade two’s in a joyous exchange while remaining in their stylistically identifiable voices. Hargrove’s staccato darts while Miller plays provide a smooth transition between solos. Miller comps with pulsating vivacity behind Hargrove’s solos of accented exclamations, melodic improvisational phrases and double-tongued whimsy.

In Harmony includes two contrasting Thelonious Monk compositions, “Monk’s Dream” and “Ruby, My Dear,” much as the package itself includes contrasts between medium-tempo ebullience and slower balladeering. Hargrove and Miller start “Monk’s Dream” with a straightforward presentation of the melody. However, knowing that Monk’s style suggests freedom, individualism and inventiveness, playfulness ensues, even as they avoid dazzle. Their matured narrative approach builds to a rocking blues before concluding again with a respectful return to Monk’s playful melodic lines. “Ruby, My Dear,” as well as all of the other slower pieces, proceed with assurance, control and beauty. Hargrove’s unmistakable tone remains consistent from the time 32 years ago when he seemed to arrive fully developed on his first albums when he performed confidently with jazz veterans like Joe Henderson, Al Foster, Johnny Griffin and Stanley Turrentine. Miller improvises with grace notes, treble-clef sweeps and adjacently chorded light splashes of his own while maintaining the piece’s blues movement with his left hand.

The blues returns in Hargrove’s remembrance of “Blues for Mr. Hill,” a soulful down-home blues indeed. Introduced invitingly by the master, Miller, “Blues for Mr. Hill” musically recalls their similar youthful backgrounds with gospel. With Miller’s walking bass chords, tremolos, and intimations of a tripleted meter of three within four animating the performance, trumpeter and pianist perform with an infectious irresistibility that might be heard walking down Bourbon Street or Beale Street.

And then In Harmony includes tributes to Dizzy Gillespie, who inspired generations of jazz musicians…including Hargrove, of course. In the CD package, Jimmy Heath is reported to have said that Hargrove “was so much like Dizzy, whom I played with…. [Hargrove] had everything—like another coming of Dizzy.”

The producers chose to end the first CD with “Con Alma” and the second with “Ow!”, two compositions that recall Gillespie’s melodic interests, rather than those of bebop. “Con Alma” maintains a consistently low temperature, avoiding fiery blazes, as Hargrove improvises with his golden tone and fluidity. And “Ow!” represents the duo’s gracious encore after the expected final number on Disk 2, “Blues for Mr. Hill.” With a spirited ease of expression and a jump feel, along with glides into stride, Miller’s version of “Ow!” takes a brief but memorable virtuosic solo of effortlessly rising and descending treble-clef 64th notes, entertaining the audience with the expansion of the quickened expression beyond its expected length.

The producers, showing their respect for the artists, created a complete package consisting of photographs, a journalist’s appreciation, detailed anecdotal remembrances from numerous musicians, and 102 minutes of  Hargrove/Miller’s music—music that may have been wished for but was thought to be unrecorded until the collaboration of producers, recording engineers, booklet and cover designers, and the estate representatives for Hargrove’s and Miller’s memories.

Such a significant release as In Harmony recalls Roy Hargrove’s and Mulgrew Miller’s incomparable, admired talents and generous personalities, and it serves as a reminder of how much they are missed.