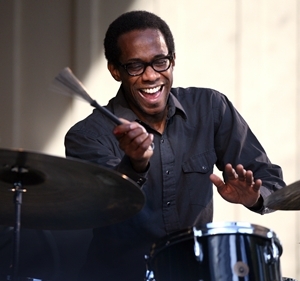 Widely respected in the jazz world as the drummer for many heroes of the music world, including Daniel Lanois, Joni Mitchell, Bob Dylan, Wayne Shorter, Seal, Bill Frisell, and Emmylou Harris, Blade’s undeniably melodic approach as composer has brought him to the forefront as band leader of the Fellowship Band, a long-running ensemble with whom he has released three albums and toured to critical acclaim.  This is a return engagement by special request from Pete Douglas.  Trust the house again for a stirring performance.  .